Section 21 is the leading cause of statutory homelessness. This law allows evictions with no reason needed, and this is one more reason why we should scrap it.

To some extent, this is stating the bleeding obvious. Since 2012, the end of a private tenancy has been the leading cause of homelessness cases accepted by local authorities, but until now no one has specifically pointed the finger at Section 21. Today, we've been able to demonstrate it. 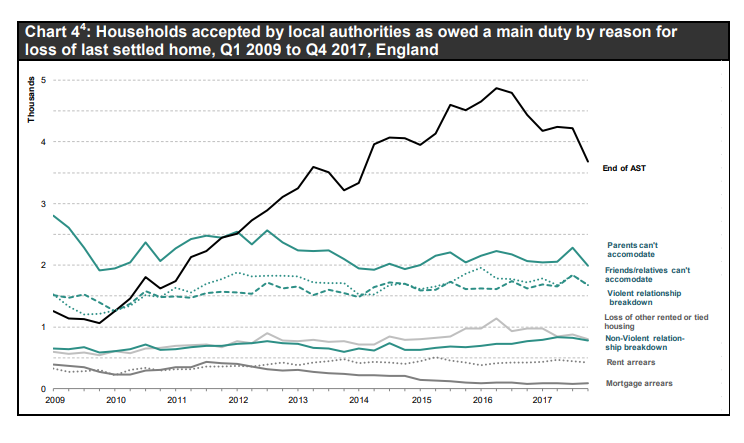 The rise in private renters becoming homeless has been staggering, particularly when you see the relative lack of fluctuation in other causes of homelessness.

In the past couple of years, since the housing market has been dampened by new taxes on landlords, homelessness cases have dropped a little. We saw a similar drop in the number of Section 21 evictions (recorded by the Ministry of Justice as Accelerated repossessions), so we decided to compare the quarterly figures since 2009 side-by-side - along with the number of evictions using Section 8, where the landlord does have to give a reason. These are recorded by the MoJ, confusingly, as Private Landlord repossessions. 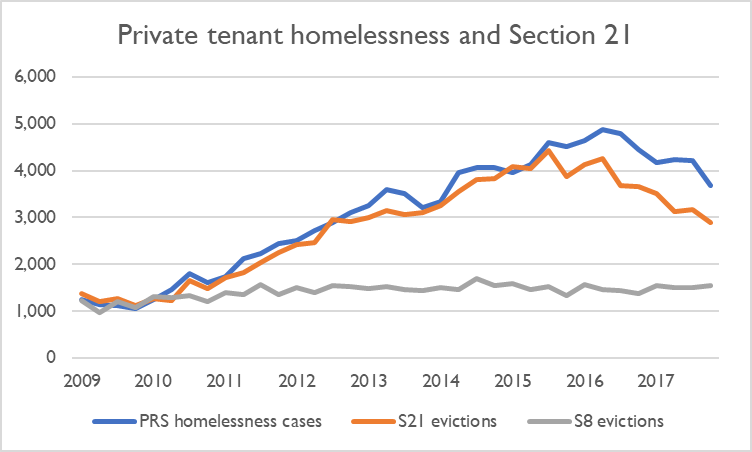 Section 8 evictions barely rise - because of the burden of proof, most landlords prefer Section 21 (though they cannot use it if they have neglected certain legal responsibilities such as keeping the house free of severe hazards, getting a gas safety certificate or protecting the tenant's deposit). But the relationship between homelessness cases arising from the end of a private tenancy and Section 21 is uncanny.

Again, this should not be surprising. To be rehoused by their council, households facing eviction typically have to be unintentionally homeless, so they can not be at fault, and they are advised to wait until the bailiffs actually force them out (and be physically homeless) before the council is able to accept them. Some tenants with rent arrears can be considered to be unintentionally homeless (they have tried everything to resolve their arrears) but those cases are recorded separately by the Ministry of Housing, as the graph above shows.

That's not quite enough to prove the connection - tenants not at fault can be evicted through Section 8, or evicted illegally. So we looked at the correlation, and broke it down between London and non-London homelessness cases (we don't have a further geographical breakdown). 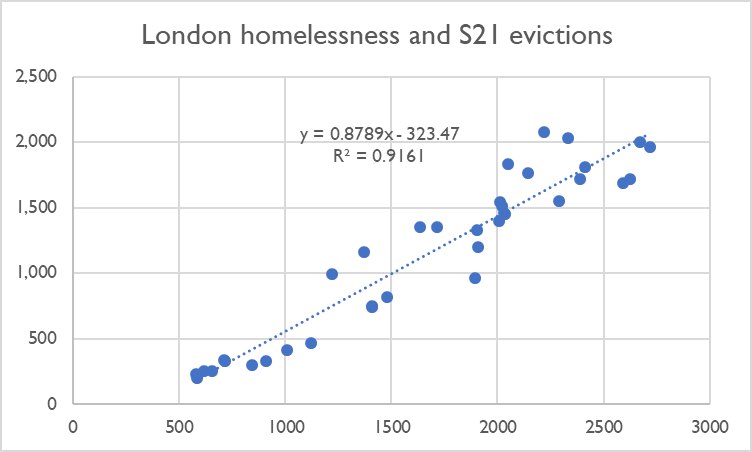 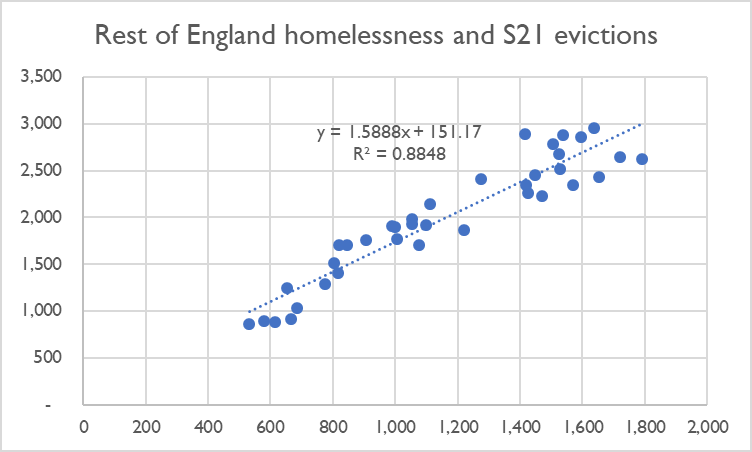 That's a pretty tight correlation - we can say that 92% of the rise in homelessness cases caused by the end of a private tenancy in London can be explained by no-fault evictions, while 88% is the figure outside London. Nationally, the correlation is tighter at 94%.

The disparity in London between evicted households and those who are accepted as homeless can be explained by the lack of available accommodation in the capital. With less support to offer, councils there are stricter in applying the criteria to homelessness applications, which in turn lowers tenants’ expectations. In addition, many victims of eviction may not present as homeless as their immigration status gives them no recourse to public funds.

Outside London, because the housing shortage is not so acute, councils have comparatively more capacity to help at an earlier stage in the eviction process, so more households can be helped before the landlord applies to the court for bailiffs.

Estimating the impact of Section 21

First we assume that all households accepted as homeless following the end of a private tenancy in London were evicted through Section 21, which is 5260. Then we assume that, of the 11,070 households made homeless by the end of a private tenancy outside London, 5987 were evicted under Section 21. This gives a total of 11,247 homelessness cases that could be attributed directly to Section 21 repossessions. The remaining 5073 homeless former private tenants cannot easily be linked with a particular eviction process.

As the correlation between the two figures is so close, and homelessness cases involving rent arrears are recorded separately (1760 in 2017), we are confident that 11,247 is a reasonable estimate. This is 19% of the national total of 57,890, which would make Section 21 the leading cause of homelessness. The second most common cause is parents being unable or unwilling to accommodate, at 8370, or 14% of cases.

Additionally, even if all Section 8 evictions resulted in homelessness acceptance, there are only 6098 of these, which would leave 10,222 cases likely to be Section 21 - still more than the number forced to leave their parents' home. But the correlation with Section 8 is so weak - there has been so little variation in those evictions - this would not make a lot of sense.

The reasons behind Section 21 evictions

The government is currently consulting on how to give tenants greater security of tenure and we are campaigning alongside ACORN, the London Renters Union and the New Economics Foundation to push ministers to abolish Section 21. Our petition has nearly 50,000 signatures and we have created an easy way of responding to the consultation.

Although they are no-fault evictions, there is always a reason. Some are wrong: the landlord decides that evicting a tenant is easier than making requested repairs. Abolishing Section 21 would stop these happening completely.

Without Section 21, landlords could still get back their properties by providing a legal reason under Section 8, which includes rent arrears, breach of tenancy, selling the house, or moving back in. According to the English Housing Survey, 63% of tenancies ended by the landlord are due to the landlord wishing to use or sell the property.

As part of our proposal, we want a requirement on landlords to compensate blameless tenants who are evicted. This would incentivise the sale of tenanted properties as well as supporting the financial resilience of tenants. This would both reduce evictions and, by enabling evictees to better afford the deposit, first month’s rent, and moving costs for a new home, fewer people would present as homeless, reducing pressure on cash-strapped councils, who currently pay £845m a year on temporary accommodation.

The Joseph Rowntree Foundation wrote an excellent report on the rise of Section 21 last year, and identified housing benefit failing to keep up with market rents as another major reason for the rise. Being unable to afford a rent rise will lead to a Section 21, then being unable to afford anything else in the market leads to homelessness. Clearly, therefore, other measures are needed alongside abolition of Section 21, including improving tenants’ access to housing benefit, and building more social housing.

But Section 21 is indefensible. The ability of landlords to evict tenants without grounds allows them to cash in their assets and leave wider society to pick up the tab in the form of expensive temporary accommodation, and misery for the people affected.

Councils have new responsibilities to prevent homelessness, and the government has just launched a strategy to end rough sleeping, but they have no chance of success if landlords can continue to kick out tenants with impunity. If the government is serious about preventing homelessness it must abolish Section 21.

Read more about the campaign

Respond to the consultation

Edited 29/11/2018 to clarify that this specifically refers to statutory homelessness.