The decline of ownership, and meaningless means

A version of this article appeared on Inside Housing.

Last Tuesday, the Resolution Foundation dominated the headlines and airwaves with its report into levels of home ownership. Using figures from the Labour Force Survey, their big finding was that Greater Manchester saw the biggest fall in owner occupation from its peak at the turn of the century. It was a pattern seen across the north.

It’s no shock that the housing crisis is gripping the whole country. Our analysis of the 2011 census in 2014 found that ownership levels were already dropping in major urban areas. These figures are a bit more up to date.

While London and the South East have the most insane house prices, buying a home anywhere has become more difficult. This is because wages haven’t risen by much, and more people are in insecure employment, so it’s harder to save and to qualify for a mortgage. House prices became uncoupled from wages before the credit crunch, and didn’t revert to affordable levels after it.

Speaking on the Today Programme, the RF’s economist Matthew Whittaker highlighted the implications of a larger private renter population: the sector is “not fit for purpose”.

We agree. Six- and 12-month contracts mean it’s impossible to settle down in a rented home, because you could be kicked out – or priced out by a rent rise – within the next year.

Of course not all landlords would do this, but because they can, that’s not good enough if you want somewhere to call home.

Landlords reacted (on Channel 4 News, for example) by claiming that there was no need to reform renting because “the average tenancy length is four years”. This is landlords’ only argument against reform. It is also cobblers.

Here’s a chart that shows the breakdown of tenancy length (or, rather, how long private tenants have lived in their current homes) from the same source that the National Landlords’ Association’s Carolyn Uphill was citing on Tuesday. 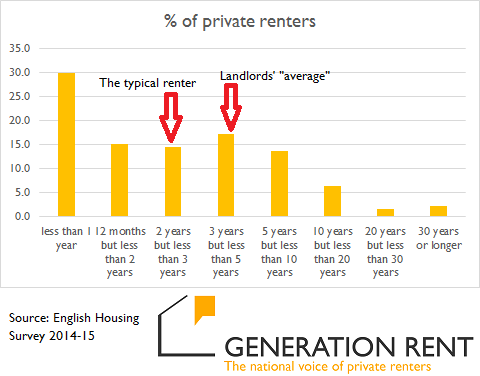 Landlords are referring to the mean, which doesn’t reflect the experience of most people in the way the median does. In calculating the mean, you effectively take one tenant living 30 years in their home and give them as much weight as 30 tenants who have spent one year in their homes. The mean is meaningless.

But landlord groups trot it out because they’re scared that reform of the private rented sector will mean that they start having to act like businesses and treat their tenants as customers rather than disposable custodians of their pensions.

To be fair to Carolyn, she also pointed out that only 7% of tenancies are ended by the landlord. Which is still a lot. But that stat fails to take into account tenants escaping a home their landlord won’t fix, or rejecting a rent hike by moving out. Our own polling suggests that one in four renters have experienced an unwanted move like this. That number should be zero.

The Resolution Foundation posed some hard questions for a government whose response to the housing crisis has been akin to bailing out a sinking boat with a shot glass. Its obsession with home ownership is understandable – it’s popular.

But if a renter can uphold the terms of their tenancy agreement to the letter and still face an unaffordable rent rise or a no-fault eviction, then home ownership will always be more popular than it ought to be. And if home ownership remains popular yet unattainable, a lot of people are going to get angry.

Sign our petition to give renters protection from unfair eviction.

Here are some bits of coverage we got: