Renters are 75% more likely to experience serious anxiety and depression than home-owners, according to a Survation poll commissioned by Generation Rent which we are publishing today. Nearly two in five people who rent their home say they have experienced serious anxiety or depression in the past year. One in five (21%) homeowners reported similar experiences.

The findings suggest that someone’s housing tenure can have a significant impact on their mental wellbeing. Private renters are typically in short, insecure tenancies, which makes life unstable and household finances unpredictable. Social tenants are more likely to be under financial pressure from reforms to social security, such as the bedroom tax. In comparison, owning one’s own home is cheaper, with less prospect of sudden increases in costs, and offers more stability in one’s life.

Tenure appears to be a better predictor of mental health than economic wellbeing. Levels of anxiety and depression are high across social groups – 28% for ABs, 29% for C1s and 31% for DEs. 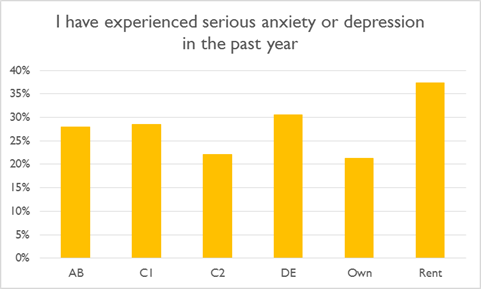 Yesterday's English Housing Survey found a similar pattern when asking respondents about their "life satisfaction" - this can be found on pages 34-40 of the report.

Renters live a precarious existence where they have no idea if they’ll be living in their home in a year’s time, or if they’ll be able to afford to. They might also live in squalid conditions that they are powerless to do anything about. That lack of stability and comfort erodes their wellbeing so it is no surprise that levels of anxiety and depression are higher than for home owners. Better rights for renters would not only create a fairer housing market, but there’d be public health benefits too.