As the consultation period on the government's proposals for longer tenancies draws to a close - the deadline to respond is this Sunday - we are handing in our End Unfair Evictions petition to the Ministry of Housing today. It passed 50,000 signatures on Tuesday, helped along by #VentYourRent.

And if that wasn't enough to make the government pay attention, new polling from Survation finds that our demands have the backing of the wider public, including Conservative voters. 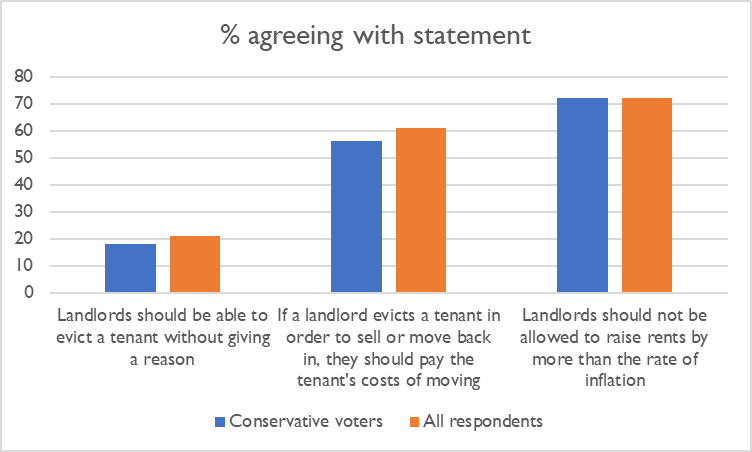 Three fifths of respondents to the poll (59%) agreed that tenants who pay their rent and take care of their home should have an automatic right to stay in it, while 61% believed that landlords who evicted tenants in order to sell or move back in should pay the tenant's moving costs. Just 21% of respondents thought landlords should be able to evict a tenant without giving a reason.

Support for controlling rents was even higher: nearly three-quarters (72%) of respondents agreed that landlords should not be allowed to raise rents by more than the rate of inflation.

There was stronger support for the belief that landlords should be subject to the same levels of regulation as other businesses (79%) and that tenants should expect the same level of consumer protection from their housing as they would from other services, such as their gas or electricity providers (81%).

If a utility company goes out of business, their customers are allocated a new supplier by Ofgem. Currently, if a landlord sells up, the tenant has to find a new place to live themselves – at their own expense.

The poll reveals that these measures would be popular across the whole population and political spectrum. A majority of owner occupiers (57%) would support tenants receiving compensation if evicted by a landlord selling up or moving back in. Older voters are more in favour of rent caps than younger voters – 79% of over-55s agreed with the statement compared with 68% of 18-34 year olds.

Among people who voted Conservative in 2017, support for limits on rent increases is, at 72%, the same level as the wider population, and 56% agree that blameless tenants should have their moving costs paid if evicted. Two thirds (64%) disagree that landlords should be able to evict without reason – more than the wider population. The law that allows this, Section 21 of the 1988 Housing Act, was introduced by the Thatcher government.

The government is currently consulting on proposals to introduce three-year tenancies with flexibility for the tenant to move out if they need to. But landlords would still be able to evict tenants at the end of the three years without needing a reason, and at any time after the first six months if they needed to sell or move back in.

We are campaigning alongside ACORN, London Renters Union and New Economics Foundation to strengthen the protections for tenants by abolishing Section 21, thus ending the ability to evict without grounds. We think rent rises should be restricted to wage growth* and landlords evicting to sell or move back in should pay the equivalent of three months’ rent to support the tenant in finding a new home. This would also incentivise sales with sitting tenants.

Private renters are well aware of how precarious their tenancies are. Few have any certainty that their home will be theirs in a year’s time, and if their landlord serves an eviction notice, they will face months of upheaval and thousands of pounds in costs to find a new place to live.

It is heartening to see that the wider public recognises that we all need a stable home. The government has timid proposals for three-year tenancies, but there is clear support across the political spectrum for indefinite tenancies with real protections for renters. This should give ministers the confidence to go much further.

Make your voice heard: respond to the consultation by Sunday 26 August.

Full details of the poll are available here.

*The polling question was slightly different for simplicity's sake, but the same principle applies. We just think wage growth is fairer because inflation has outpaced it for much of the past decade.