Demand a Queens Speech on Housing

The dust is settling after the General Election and the government finds itself with a new ministerial team and a precarious majority. None of the manifestos offered a coherent solution to the housing crisis, but Generation Rent is committed to making it a priority for the new government.

We have offered them a strategy which will jump-start the house building industry and create a fair deal for people renting. Our “Queen’s Speech on housing” is sponsored by CWU Youth, the youth network of the CWU Trade Union.

The housing crisis cannot be fixed without proper leadership, effective regulation, a commitment to wean the country off rising house prices and investment in public housing. Our demands include a position of Secretary of State for Housing, protections for tenants when their landlord wants to sell the property, and a system of rent control and tax on landlords which would raise money for a public house building programme.

Our proposals are published as a poll from Survation finds that 63% of private renters want to leave private renting in the next five years but only a third of those think it’s likely to happen. That means that out of the UK’s 4.75m private renter households, 1.95m find themselves stuck in an unsuitable tenure. 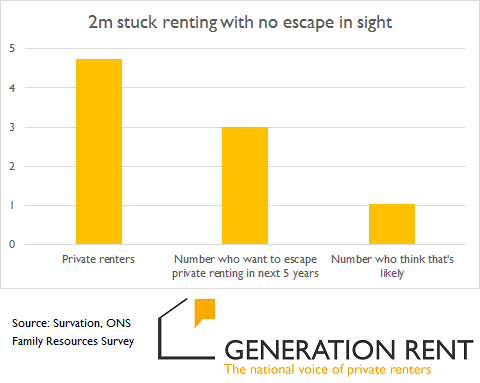 55% of private renters would like to buy a home in the next five years, which equates to 2.61m private renter households. That would involve more than half a million households becoming first time buyers every year – a level not seen since 2002.

We need to act fast to get the government and opposition parties to adopt this plan. Please email the party leaders now on this page and ask them to meet with us. We've offered some suggested wording so it should take only a minute or two.