We need to talk about short term lets

You’ve probably heard of Airbnb. But you might not have heard of Flipkey, HomeAway, HomeStay or Hostmaker. The concept stays the same - property owners rent out their house or flat for ‘short-term lets’, also known as holiday homes. They can be a great solution for covering your rent or mortgage bills for a few weeks whilst you’re away or utilising that spare room in your home.

But the problem is that local communities are finding more and more entire properties becoming permanent holiday homes. It’s eating up the market of houses that families can call home, and pushing up local rents.

And it’s not just about properties being swallowed up. Time and time again locals complain about sleepless nights as holiday makers party for days on end or when winter creeps round finding your completely alone in your block of flats with no neighbours or community.

In fact the problems with short term lets have gotten so bad that local governments around the world are taking serious steps to tackle the problem. Barcelona has introduced a tourist tax, limited short term lets to just 90 days of the year and lobbied Airbnb to share their data to catch out users trying to cheat the system. New Orleans is considering whether to ban whole-property short term lets in parts of the city. Amsterdam, Berlin and Venice have been taking action too.

In Britain, people with a spare house are still free to do what they like with them. In London the number of days someone can let out a whole property on a short term basis is restricted to 90 per year, but this can only be enforced by local planning departments, which are financially stretched (like the rest of local government). Other parts of the country - Edinburgh, Liverpool, Skye - have as much tourist demand but no restrictions.

People are starting to take action: Living Rent Scotland has set out proposals to make the system fairer. And a group of MPs have come together to form an ‘All Party Parliamentary Group’ to discuss how to tackle the big issues of short term lets.

At Generation Rent, we’ve been gathering our supporters’ experiences of Airbnb and other short term lets platforms. Here’s just a few of responses shared so far:

"There is no consultation or planning permission required, and those with holiday lets are often still paying Residential Council tax, not business rates. Renting out your main residence for a few weeks is OK, but when there is no plan to reside, it is a business, and nothing else, and should be taxed as such."

"I am a private tenant and I rent out rooms in my home as short lets. They are generally to overseas people on internships, holidays, courses or students for 1 term or who have secured a job and need somewhere till they find a long let. A few are from the UK and are moving to London because they have secured a permanent job and will be looking for a long let."

Short term lets have their place, but it’s also clear that in some areas they dominate the market, making it harder to find somewhere to rent or, even worse, encouraging landlords to evict tenants before the busy summer season to make a bigger profit.

Now another platform has started brazenly encouraging landlords to do just that: Hostmaker is advertising all over London’s transport network. Here is one of their ads: 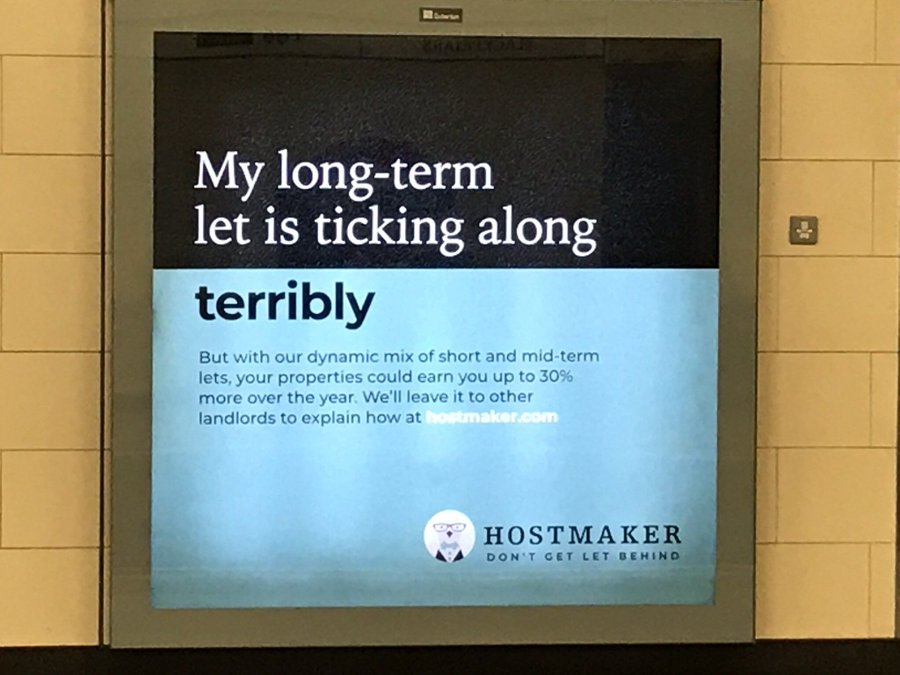 By using posters plastered on buses and Tube platforms to suggest that landlords turf out residents in favour of tourists, Hostmaker is attacking London’s communities. The Mayor of London is striving to make rents in the city more affordable - so he should not be allowing rogue companies to undermine his efforts on public property under his control.

So today we’ve launched a new petition to ask the Mayor to take down these distasteful adverts - please sign it here.