Inspired by Savills' findings on landlord capital gains last month, we decided to look at just what sort of money landlords in the UK are making – and how much we the taxpayer are helping them.

As reported in the Guardian this morning, UK landlords make £77.7bn each year in rent and capital gains. This is more than Morocco’s GDP of £68.6bn (for a country of 33m people), making the industry the 61st largest economy in the world (UN 2013).

They are also subsidised to the tune of £26.7bn in tax breaks and housing benefit. That is higher than the £25bn of cuts that George Osborne claims are needed after the election. It is also more than our spending on the overseas aid budget of £10.3bn, job seekers allowance of £4.34bn, the Department for Culture, Media and Sport’s entire budget of £6.14bn, and the £1.13bn Affordable Homes Programme put together.

The cost of landlord subsidies to Britons is £1011 per household. That is the cost of a week’s holiday for four in Majorca, a 55” HD TV, or a Boardman Road Team Carbon bike. 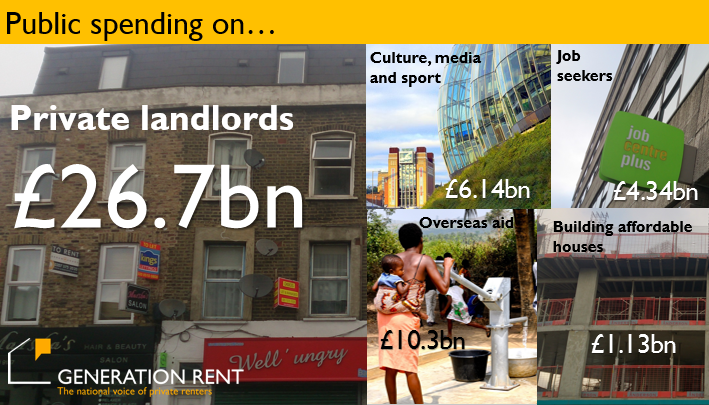 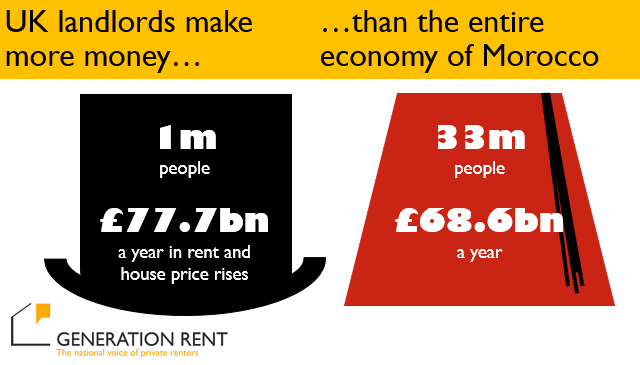 Second, landlords can claim 10% of their rental income tax-free for wear and tear purposes without demonstrating that they have made any repairs. If we assume that they pay the higher 40% rate of income tax, that amounts to 4% of the £42.3bn, or £1.69bn.

Third, landlords can deduct the cost of mortgage interest from their income for tax purposes. On the basis that landlords have mortgages worth £332bn, and have a typical interest rate of 5%, they pay £16.58bn in interest per year. If tax were paid on this at the 40% higher rate, the Treasury would get £6.63bn per year.

Fourth, there are a number of ways that landlords can avoid paying tax on the whole capital gain, including letting relief of up to £40,000 and by living in the house before selling. Instead of selling, many landlords realise their capital gain with no tax liability by remortgaging. Between December 2013 and November 2014, 95,000 buy-to-let remortgage loans were advanced, worth £14bn (CML).

These four subsidies add up to £26.7bn per year. In addition, the government is providing equity finance worth £1bn to property developers to build homes for private rent. Landlords also don’t have to pay business rates. Even if they were to pay only £1000 in business rates for each property – the average retailer pays £12,750 – that would bring the exchequer £4.75bn. Finally, HM Revenue and Customs estimates that £550m in tax on rental income is evaded by landlords each year. 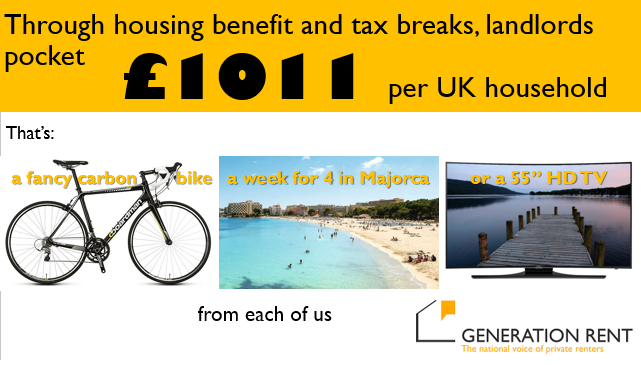 Landlords do make a contribution to the exchequer. Assuming payment of the highest tax rate of 28%, tax on the £3.05bn of chargeable capital gains would have been £854m. And taking the £16.58bn of interest payments and £4.23bn of wear and tear allowance from the £42.3bn of rental income gives a taxable income of £21.5bn. Taxed at 40% and leaving out the £550m of evaded tax, that gives £8.05bn, or £8.9bn, including capital gains tax, in total. That still amounts to a net subsidy of £17.8bn from the taxpayer.

During this age of austerity, landlords have made a colossal amount of money from capital gains and rents, and enjoyed generous subsidies while their tenants face stagnant wages and cuts to the welfare state. People who work for a living are funding through their taxes the lifestyles of people who can make a living simply because they own property and someone else doesn’t.

To redress the balance, the government can use the tax system to redress the balance and make sure landlords pay their fair share. While the value of the missing income and capital gains tax will fluctuate year by year, the annual outlay of £9.3bn in housing benefit shows no sign of going away.

To neutralise the subsidy effect of housing benefit on private landlords, Generation Rent proposes a landlord levy of 22% on all rental income, on top of the income tax landlords already pay. It would be enforced through a national register of landlords which would also levy penalties for failure to register.

The landlord tax would:

Please back our campaign by signing our petition.