I bet you thought rising house prices just made it more difficult for you to ever own your own home.

Well, it's even worse than that.

Rising house prices increase your risk of being evicted.

House prices fell during the 2009-2010 recession then have been on an upward trajectory since then. 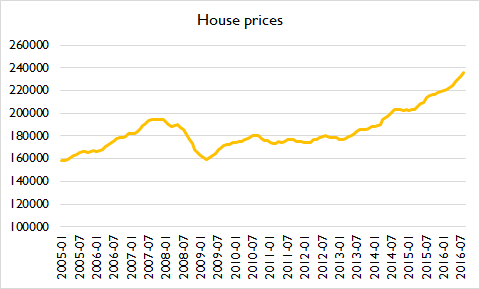 Private landlords are able to evict tenants without needing to give a reason, using Section 21 of the 1988 Housing Act. Tenants served with a valid Section 21 notice to quit have no defence and will very often move out within the two-month notice period without the landlord taking further action.

Analysis that we have done with David Adler, an Oxford academic, shows that the level of these evictions (recorded by the Ministry of Justice as "accelerated" evictions) followed house prices pretty closely. 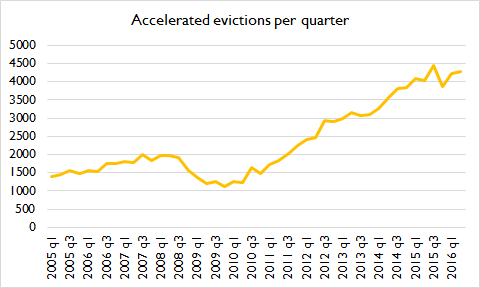 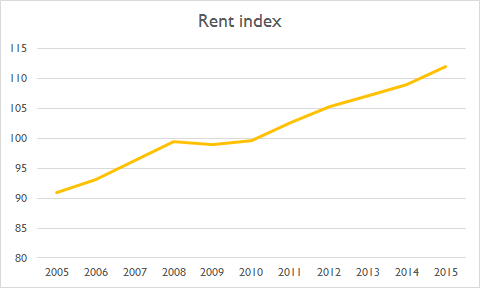 Private tenants in England are now 2.5 times more likely to be evicted without their landlord giving a reason than they were during the 2009 recession.

The total number of accelerated evictions in 2015 was 16,441 – approximately 39 tenants in every 10,000 were evicted using the no-fault process, and went all the way through the courts. This compares with 4,963 such cases in 2009 – approximately 15 tenants in every 10,000. Many more affected tenants move out without going through court, knowing that they have no defence, but the government does not record these figures. Generation Rent polling has found that 1 in 4 private renters have experienced an unwanted move.

And tenants are not to blame: in the same period, rent arrears (recorded by LSL Property Services) have actually fallen. 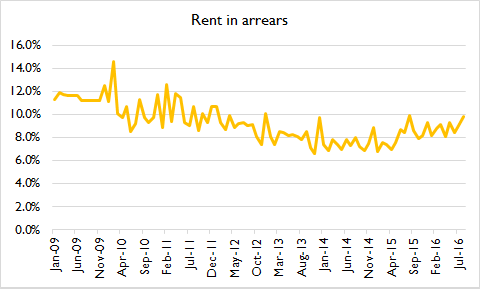 The increase in no-fault evictions comes at a time when increasing numbers of families have no option but to rent in the private sector. According to the English Housing Survey, 1.5m private rented properties are home to children – 36% of the sector.

A tenant can pay the rent on time every month and otherwise behave impeccably, and yet still be asked to leave with two months’ notice, with no appeal and no help. The influence that house prices have on the level of evictions utterly refutes any claim that tenants are adequately protected.

We are calling the government to reform the rental market to give tenants better protection from eviction and greater stability in their home, and encourage landlords who are committed to providing long term homes – instead of investors who will sell as soon as the price is right.

By abolishing the section 21 eviction process, the government would encourage landlords who wished to sell to do so with their tenants in situ. Should landlords have a genuine reason to take back their property from a tenant, they would need to have appropriate grounds to do so, and compensate the tenant. Generation Rent estimates that three months’ rent would cover the cost of an unwanted move. As a result of this change in the law, tenants would have indefinite tenancies and still be able to move out if their circumstances changed. Read more about our proposals in our new paper.

As long as the government prioritises the interests of amateur landlords, renters cannot expect a stable home.