This week we launched the End Unfair Evictions coalition with ACORN, London Renters Union, and New Economics Foundation. We're calling for an end to Section 21, which allows landlords to evict tenants without needing a reason.

One reason we're doing is that existing protections are not working in practice.

Back in 2014/15, we fought a hard campaign alongside Shelter, GMB Young London and others to give tenants basic protection from eviction when they complained about their landlord.

The resulting measures in the Deregulation Act 2015 stopped landlords from serving a Section 21 eviction notice to tenants if the council had found hazards in the property and served an appropriate improvement notice on the owner. This protection lasted for 6 months and was meant to give tenants more confidence in getting their landlord to fix health and safety problems, because the landlord can no longer simply retaliate by kicking them out.

Over the past few months we have been collecting freedom of information (FOI) data from the 100 councils with the biggest private renter populations (accounting for two thirds of England's private renter population). Together with similar data obtained by the Liberal Democrats and shared with us, we assessed how the revenge eviction law has been working.

According to the English Housing Survey, 17% of private rented homes have at least one severe "Category One" hazard, and councils' environmental health departments are responsible for ensuring that landlords fix these. But the FOI data suggest that just one in six of those private tenants is getting the council's protection from a revenge eviction.

Many hazards will be missed in the first place as councils do not follow up every home that is complained about. Of the 83 councils that recorded both complaints and inspections, 58,586 requests were made but councils only carried out 39,148 inspections.

We shared this data with the Times, which has published the story this morning. Here's its visualisation of the data: 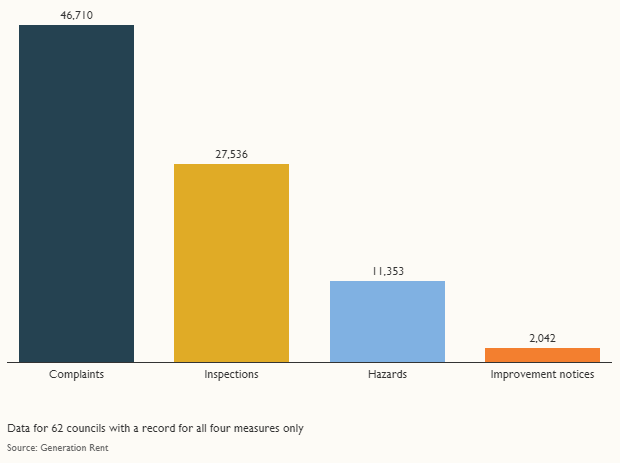 Despite their new responsibilities, councils took 23% less formal action in the first full year that the Deregulation Act was in force than the year before. The number of improvement notices was down from 2959 in 2015-16. Complaints about private landlords also fell in that period, but only by 6%.

And most councils are failing to record their interactions with tenants who are facing a revenge eviction – only 4 of the 97 councils that responded on this question had logged the number of Section 21 eviction cases they dealt with in 2016-17: Bournemouth (2), Cheshire West & Chester (11), Plymouth (18), and Wigan (0).

Eight councils served as many improvement notices as there were hazards, an indication that the tenants involved did enjoy protection from revenge eviction:

But most of these councils had a low complaint response rate, aside from Dudley, which inspected in 77% of cases.

Right now tenants only get security over their home when their landlord is breaking the law and their council takes sufficient action. This evidence shows that too much can go wrong in a council’s processes – from not responding to complaints to failing to issue formal notices – to reliably provide even this basic protection.

Instead of this flaky, fiddly and temporary system of protection, tenants need a stronger fundamental right over their home. The government should restrict the ludicrous ability of landlords to evict tenants who have done nothing wrong by abolishing Section 21.

The Times agrees. The newspaper calls for its repeal in its Leading Article this morning - though it favours the Scottish model, which doesn't go far enough in protecting tenants. Still, the pressure for change keeps building.

There is more coming up in the campaign on Monday - help us spread the word and take two minutes to sign up for our Thunderclap now.

How we did the research

Generation Rent made Freedom of Information requests to the 100 councils with the largest private renter population according to the 2011 census. It requested data on the number of complaints raised with the council about conditions in private rented homes and the number of tenants who made a complaint who were issued with a Section 21 eviction notice. All but three councils (Enfield, Hackney and Lewisham) responded.

The Liberal Democrats shared data gathered through Freedom of Information requests to 82 local authorities on:

Generation Rent also requested data on inspections, hazards and improvement notices from 18 councils that were not included in the Liberal Democrats’ data.