Is life outside the capital the answer for London’s renters?

Another year, another inflation-busting rent rise. Many of London's workers would be forgiven for wondering whether it wouldn't make sense just to up sticks and join the commuters vaulting the green belt every morning. Well wonder no more.

We looked at whether it is cheaper to rent outside of London and commute in by train every day, or if the capital is still worth it. The answer is the latter - just about.

The cheapest place to live and commute to London is Hastings on the south coast. The median rent on a 1-bed flat there is £420 a month, and it costs £5272 for a 12-month season ticket. The only snag is you'll spend 3 hours on a train every day, plus an average of 30 minutes on the Tube getting to and from your workplace.

The London Borough of Bexley is a much more appealing proposition. Rent is higher at £700 a month for a similar property, but travel costs are £2188 a year. The commute into central London is fairly quick at 36 minutes each way - so you might actually have a life/good night's sleep. 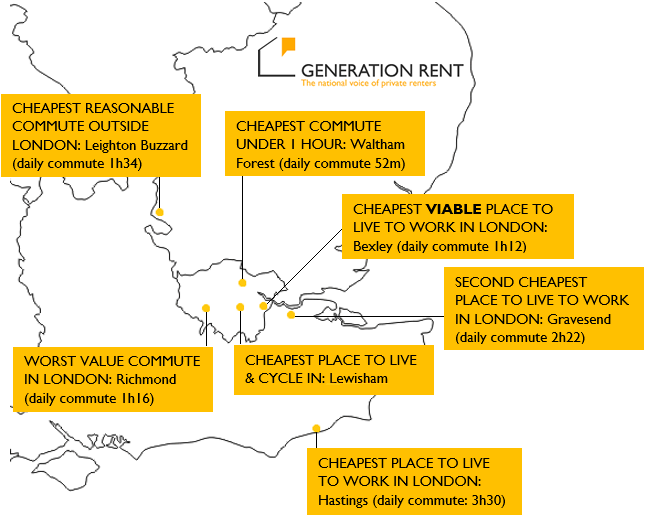 True, much of London is painfully expensive to rent in - see our full report here - but on the eastern edges it still makes more sense than quitting the capital if you want to save money. Barking & Dagenham and Havering both offer reasonable commutes and relatively low rents, costing less than £12,000 a year. That's all relative of course - rent and travel costs in northern English cities won't set you back more than £7000 a year.

And with London renters paying 4% more than they did last year, it's only a matter of time before it does become more viable to leave the city. But the soul-sapping commutes, the squeezed leisure time and the impact this will have on family life and our wellbeing are not a price London's workers should be forced to pay. It'll be the result of gross negligence on the part of our politicians.

The city is not building enough homes for people on ordinary incomes, and the next London Mayor must make affordability their number one priority. Alongside this research we have published a manifesto for London, which sets out the policies we believe will help get the capital back on track.

Generation Rent plans to campaign on this manifesto between now and the Mayoral election next year. But we need your help.

We need to raise £60,000 by 31 August to keep our campaign running. If you want to see a campaign focused on bringing sanity to the London housing market, please consider donating just £20 to get us closer to our goal. Click here for more information.