The Redfern Review: A grown-up take on the housing crisis

Earlier this year, Labour commissioned the chief executive of the country's biggest house builder to lead a study of the decline in home ownership - the main reason politicians are worried about housing these days.

The Redfern Review has been published today. It shouldn't be a great surprise that its conclusions don't fit completely with our views - there's very little comment on the needs of private renters - but it does make an important contribution to the debate, and there's a lot we can agree on. Indeed, it takes a more objective approach than parties and industry players have done when they've tackled the same subject - there's refreshingly little dogma or evidence of Taylor Wimpey's commercial interests at play (though it plays down builders' profit-driven reluctance to build enough homes).

The report looks at the decline of home ownership between 2002 and 2014, and controversially places more of the blame on restrictions on mortgages post-crash than the increase in house prices. The authors point out that rising house prices did cause the fall in first time buyers in the mid-noughties, but after the crash, when 90% and 95% mortgages were withdrawn, fewer people could benefit from the slump in house prices so home ownership continued to drop. 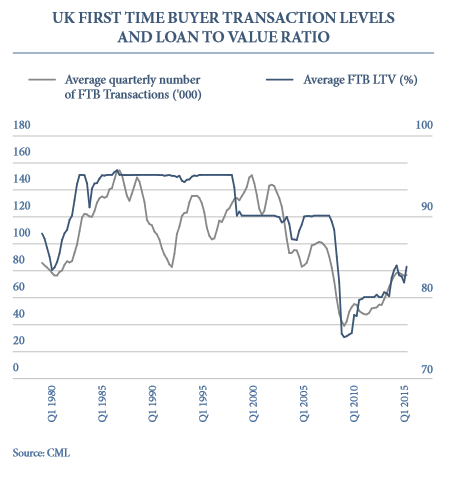 A crucial third factor behind the decline in home ownership is the decline in incomes of the 28-40 age group relative to older people. The financial crisis and the ensuing government austerity programme have hit the youngest harder than the over-40s and reduced their spending power in the housing market.

Why is this a problem? It implies that would-be landlords (typically over 40) are in a stronger bargaining position than first-time buyers in the housing market, so can outbid them for properties. This is a new articulation of the problem and very useful in helping us understand the role of landlords in the housing crisis.

While the government has unhelpfully stoked house price inflation through Help to Buy, it has, to its credit, made moves to address declining relative incomes, bringing in a 3% stamp duty surcharge on additional properties earlier this year and phased reduction of mortgage interest relief for landlords starting next April.

This should shift the relative purchasing power of first-time buyers, and already we're seeing an increase in first-time buyer numbers. There were 91,600 in the last quarter according to yesterday's CML figures, and a quarterly average of around 75,000 in the two years before the original tax announcement in July 2015. There has been a corresponding fall in buy-to-let purchases - HMRC records 56,100 transactions liable for the surcharge, while we estimate that 2013-15 saw an average quarterly increase of 78,000 private rented homes.

The Review recognises that many renters won't enter home ownership as things stand, and that there is an urgent need for homes for people on low incomes. The government could boost supply of affordable housing by earmarking the receipts of the landlord surcharge for this purpose.

Beyond its original modelling, the Review makes a number of sensible recommendations, including:

Finally, their big policy proposal is for a Housing Commission, much like the recently established one for Infrastructure, which would foster bipartisan solutions to the housing crisis that stretch beyond General Elections. It's not flashy, and is in keeping with the grown-up approach the Review has taken.

The Redfern Review is commendable, but the scale of the housing crisis demands more bold ideas if we want to reduce rents to an affordable level, on a timescale that helps those who are struggling now.