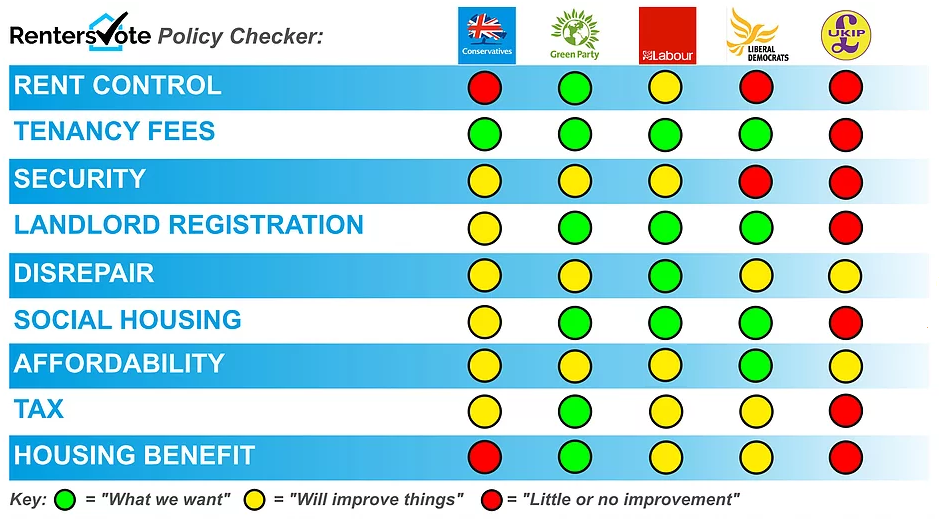 Basic colour-coding obviously doesn't tell you the whole story, so here's how we got there.

This was the first of six demands we made at the start of the campaign. Labour reheated their proposal to limit rent increases that was first promised in 2015 - this will help renters plan their finances better, but expensive rents would stay expensive. The Greens went further by promising a Living Rent - usually considered to be up to a third of income.

The other parties made no commitments, so got a red mark from us.

This is the only area the Conservatives get a green light on - they promised to ban fees, as did the Greens, Labour and the Liberal Democrats. Only UKIP made no mention of this.

We've been calling for protections from eviction and there have been positive moves from several parties, which don't quite go far enough. The Conservatives will look at improving security for "good tenants". This seems to go further than simply encouraging longer tenancies, which is what they're already supposedly doing - and is all the Lib Dems offer up. The Greens offer "more secure tenancies", and Labour's answer is three-year tenancies - again, a 2015 policy, and one that begs the question, "what happens at the end of those three years?"

We're calling for landlord licensing throughout the country and the Greens, Lib Dems and Labour have all obliged, the former two promising mandatory licensing, with Labour offering councils greater powers, and the latter two promising to publicise criminal landlords.

While they aren't fans of licensing, the Conservatives get an amber for promising to crack down on discrimination in the rental market.

One area where all the parties are striving to do better. The Conservatives offer to improve energy efficiency for households in fuel poverty. The Greens will increase funding for local councils. The Lib Dems will "increase minimum standards". UKIP will make landlords' receipt of housing benefit conditional on homes being in good repair.

Labour is out in front on this, having done more to specify minimum standards (to cover electrics, vermin and damp), and promised to empower renters to take action against negligent landlords.

The Conservatives made a big deal of their conversion to state-built housing, but unfortunately they aren't committing to making it especially affordable. They have proposed to improve councils' access to land and finance, which merits an amber. The Greens, Labour, and the Lib Dems all promise 100,000 social homes a year, while UKIP merely propose a review of housing associations.

This was one area where we had no particular demand, but any policy that will reduce house prices gets points. Labour's recent Mini Housing Manifesto offers homes to buy at perpetual discounts of up to 40%, which raises them from a red to an amber. Holding them back is their commitment to the wasteful, counterproductive Help to Buy scheme. UKIP promises a similar line of state-built, discounted homes.

The Greens commit to stable house prices, though this lacks detail, while the Conservatives up their building targets to 250,000 a year by 2022. The Lib Dems win this round with their ambition for 300,000 new homes a year.

Our outdated system of property tax is one driver of damaging speculation, so reform is welcome. The Tories were on to something by bringing housing wealth into means testing for social care, but came up with the "dementia tax". The Greens would trial a land value tax, while Labour would only consider it. The Lib Dems would give councils powers to penalise the hoarding of land and housing. UKIP offer nothing.

Finally, the Conservatives scrapped housing benefit for 18-21 years olds and for that reason get a straight red. Labour and the Lib Dems would reinstate it, as would the Greens, who would also reverse housing benefit cuts. Nothing from UKIP that wasn't already covered by Disrepair.

Generation Rent is not affiliated to any party - we will work with any party in order to get a better deal for renters. We've endeavoured to be as fair as possible to each party based on their manifestos, and we hope this will help you with your decision tomorrow.

Whatever happens, the next government will have made commitments to renters that they need to keep. We therefore need to keep making our voices heard. Please sign up here.