Inflation is one of those annoying things that you just have to accept and deal with - the official target is, after all, 2%. But that gives the government no excuse to allow rents to go up the way they have.

Since 1998-99, when the government started collecting data on housing costs in the Family Resources Survey, the Consumer Price Index (CPI), the measure they currently use for inflation, has risen by 38%. In the same period, the median weekly rent (according to the FRS) has gone up by 80%. If rents had just matched inflation, renters would be an average of £30 better off a week. 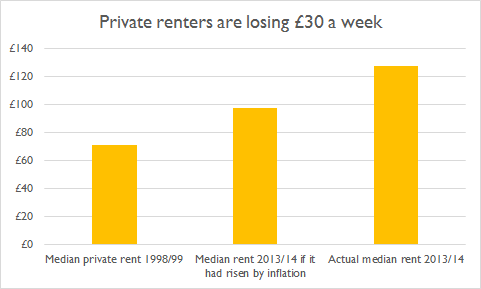 That adds up to £1546 a year. Once you take into account the tax and national insurance on earning that extra money, the typical private renter household, which earns £26,052 per annum, could get away with working 8.7% less – 3.3 hours of a 37.5 hour working week – so they could come in at lunchtime on Mondays, knock off at lunchtime on Fridays, or take an extra 21 days of holiday per year. 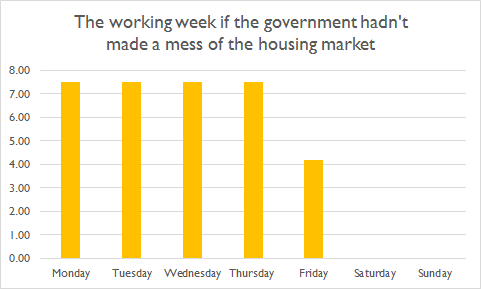 Many private renters have more pressing concerns than their work-life balance - a recent poll conducted by Survation found that given an extra £30 of disposable income a week, 39% of private renters would save it. Some are cutting down on essentials - 14% would spend more on food and clothes, while 13% would pay off debts.

The failure to keep a lid on rents is the result of gross negligence by governments of the past 15 years. Had housebuilding kept up with demand for homes, people wouldn't be parting with so much of their hard-earned money. We estimate that this is worth £7.9bn a year to the UK economy, but instead is going to landlords and ultimately inflating property prices for the dwindling numbers of people who own any.

While renters are paying for the government’s failures, many property owners are receiving free money from the government regardless of their income: pensioners are eligible for an average of £817.90 in non-means-tested benefits a year. 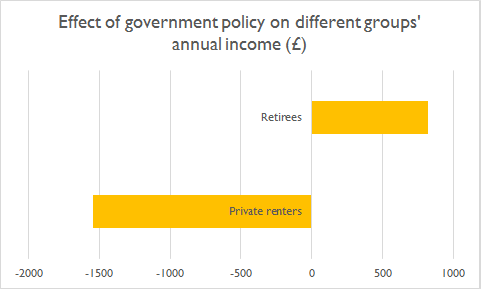 Many of these pensioners would much rather their kids had homes that were decent enough to raise a family in. We are currently crowdfunding and need just over £44,000 to meet our target. We just need 54 wealthy retirees to donate their free money and that will keep us pushing politicians to turn their attention to renters.

How did we get these numbers?