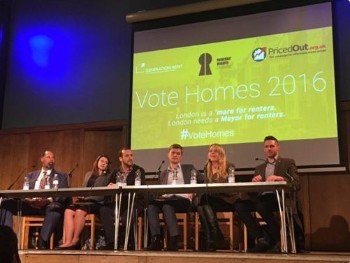 More than a hundred people came to the Renters’ Hustings on Tuesday to hear candidates from five parties tell us what they’ll do for private renters if they’re elected as London Mayor or Assembly Member – a lively discussion chaired brilliantly by Buzzfeed’s Jim Waterson. All five candidates (Sian Berry: Green, Tom Copley: Labour, Joy Morrissey: Conservative, Zack Polanski: Lib Dem and David Kurten: UKIP) said they are private renters themselves, so perhaps they know how, er, ‘special’ it is trying to survive as a private renter in this city.

All five said they were in favour of longer tenancies - which would mean more security for renters – though not all of them understood that you have to make something mandatory if you’re going to get a private landlord to actually do it.

Nicole Holgate, a private renter facing eviction from her home on the Butterfields Estate in Walthamstow because a property developer has bought the whole block, asked what the candidates would do to stop this happening to other private renters in future. This prompted an offer from Conservative candidate Joy Morrissey to help look for another, less ruthless buyer:

Other questions covered the different models of rent control used in other European cities, landlord licensing, the Housing Bill and, of course, how to get the powers the Mayor and Assembly really need to sort out London’s housing.

And the elephant in the room? Well, when a Mayoral candidate calls the London election a ‘referendum on housing’, says housing is his ‘number one priority’ then declines an invitation to London’s only housing hustings, you can’t help feeling that something beyond housing policy is broken:

We’ll have a video of the event to show soon. For more details of each candidate’s renting policies, check out www.votehomes2016.com.

Rosie Walker runs Renters' Rights London, one of Generation Rent's partners for the hustings. Sign up for their fortnightly newsletter here.