Half of private renters have faced a rent increase in the last year, Generation Rent research finds today, as we call for the government to impose an emergency rent freeze to fight the cost of living crisis. 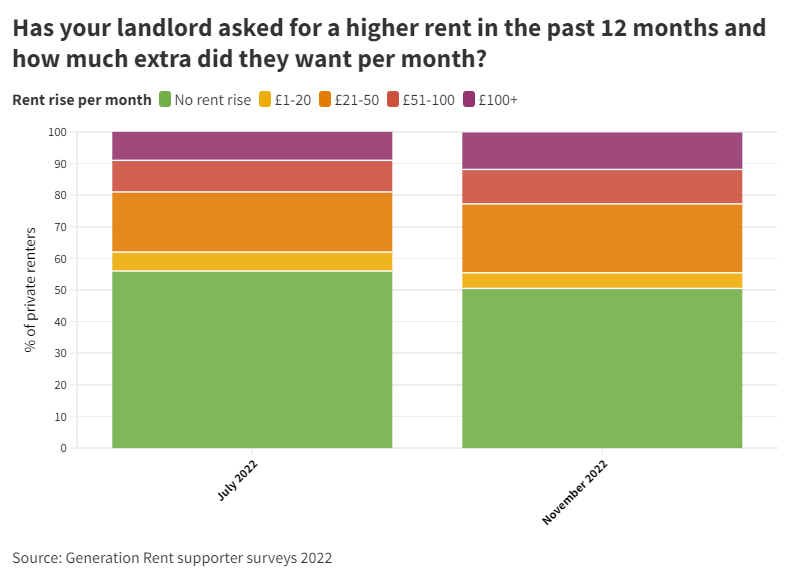 After the government acted to cap social rent increases, and improve the terms of Support for Mortgage Interest, private renters remain vulnerable to unaffordable rent increases that could force them out of their homes. We are calling on the government to freeze rents, suspend no-fault evictions and link Local Housing Allowance (LHA) to market rents.

In a survey of our supporters, half of private renters who had lived in their home for longer than a year (50%) had been asked for a higher rent. This is up from July, when 45% reported the same.

We asked respondents what reason they were given for their rent increase. The most common answer was “higher market rents” (40%), followed by “cost of living” (19%) and “letting agent advice” (17%). “Higher mortgage payments” was cited by just 11% of landlords. 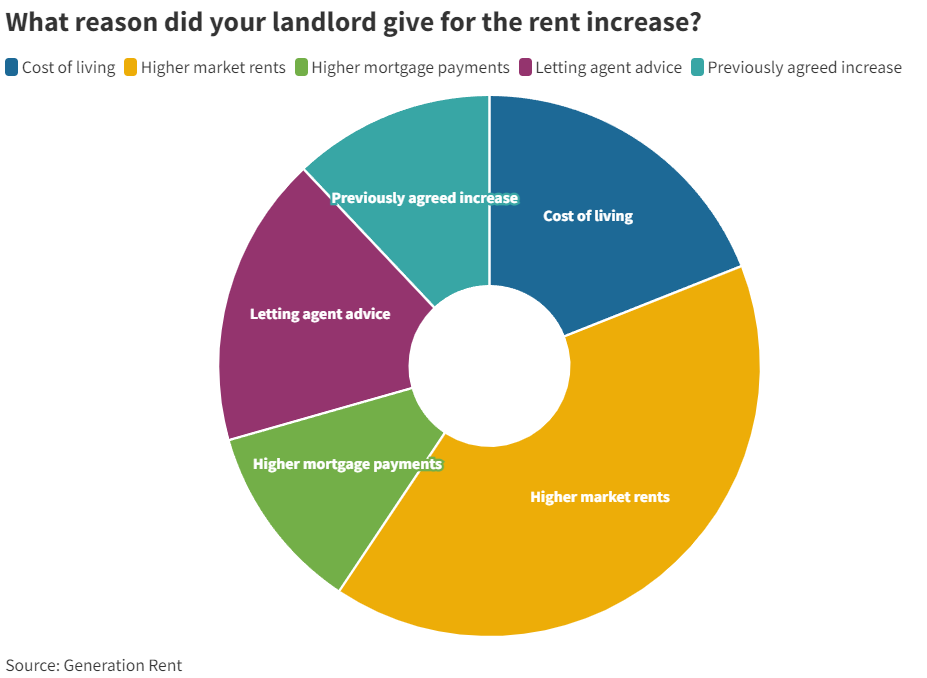 One in five private renters (21%) now report that they have cut back on spending in order to pay rent, up from 17% in July.

According to Zoopla, rents on new tenancies have increased by 12% in the past year, which appears to be behind a rise in dodgy practices in the letting process, causing extra stress for people moving home. One in three respondents who had moved in the past year (36%) attended a viewing at the same time as other people – this was up from 19% for people who last moved 1-3 years ago and 8% for people who last moved more than 5 years ago.

The most common experience for people moving in the past year was being asked for a guarantor, with 41% being asked for this – though this had already been relatively common, with 26% of people who moved 5 years ago or more reporting the same. This can often make renting especially difficult for lower income renters as they struggle more than most to find a guarantor.

One in five people who moved in the past year (20%) were asked to bid for tenancies – i.e. offer the highest rent they could afford in competition with others. This was double the proportion who moved in 2019-21 (11%) and far more than the 2% of those who moved 5 or more years ago. That tenants are having to bid to find properties to house them and their families exposes the need for reform to the sector and for an increase in house building, a promise regularly made by the government and one that has yet to be fulfilled. 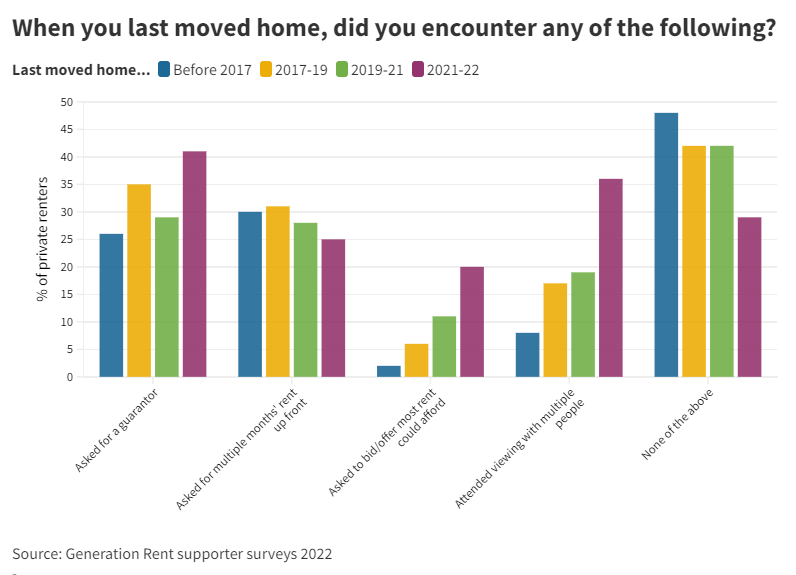 Long term, the answer to rising rents is building more homes in areas of high demand.

But with inflationary pressures not going away, we are calling on the government to protect renters from in-tenancy rent increases by freezing rents on existing tenancies, suspending no-fault evictions, and relinking LHA with market rents, to ensure people who rely on benefits can find somewhere to live and avoid homelessness. Our petition to the Prime Minister calling for these emergency measures can be found here - please sign it if you haven't already.

Despite the support package around utility bills, private renters are becoming increasingly anxious about paying their rent. While it is possible to negotiate, renters know in the current climate landlords have them over a barrel. Landlords can ask their tenants to pay the going market rent or use a no-fault eviction to force them into the ultra-competitive lettings market.

Without emergency government support, renters will face dilemmas which will result in ill-health, as a result of the stress of finding a new home, eating less or turning the heating down.