Every year the government runs the English Housing Survey. General findings are published in February, then, to the delight of housing geeks, the juicy detail on the different subsections of the market arrives in July. We've taken a look at the findings for 2015-16, published last week.

Private renting continues to be the least satisfactory tenure, with 21% of private renters unhappy with their form of tenure. If you're in London or have a family you have a 40% chance of struggling to pay your rent. And 1 in 4 working private renters outside the capital, and 1 in 4 without children, report that paying rent is difficult. Although 24% of private renters receive housing benefit, only 5% find that this covers the full rent.

Most renters (57%) have lived in their home for less than three years. While moving home is more likely to be the tenant's decision, as it should be, in 16% of cases the landlord has forced the move by asking tenants to leave (usually through a section 21 notice), raising the rent to an unaffordable level or having a poor relationship with the tenant.

For households with children the situation is worse - they are more likely to move and 20% move at the landlord's behest. When landlords ask tenants to leave, 2 times out of 3 it is to move back in or sell the property - not something tenants should expect from a professional housing market.

Another set of questions asked for reasons why renters moved - we've presented them here split between positive/neutral reasons (green) and negative (red). That red wedge includes about 80,000 households a year who are only having to move because the government permits no-fault evictions and unlimited rent increases. 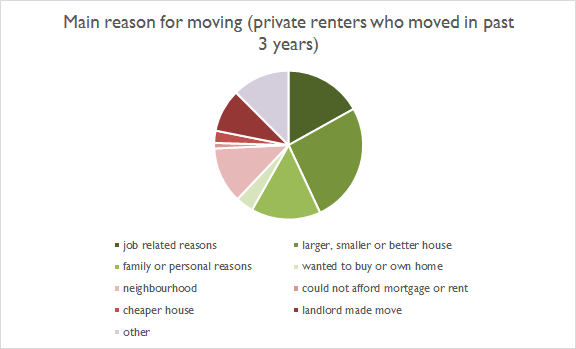 As if expensive and insecure private renting wasn't bad enough, 17% of private rented homes are considered dangerous (they have a Category 1 hazard). While it's legal for landlords to kick tenants out for no reason and charge whatever rent the market lets them get away with, this stat means there are landlords owning 795,000 properties who are actually breaking the law.

It's no wonder that home ownership is so appealing. The survey finds that 60% of private renters not only want to buy their own home, but expect to. Unfortunately the survey does not ask whether people would want to buy if there were a cheaper rental option, but they do gather reasons people don't expect to own. 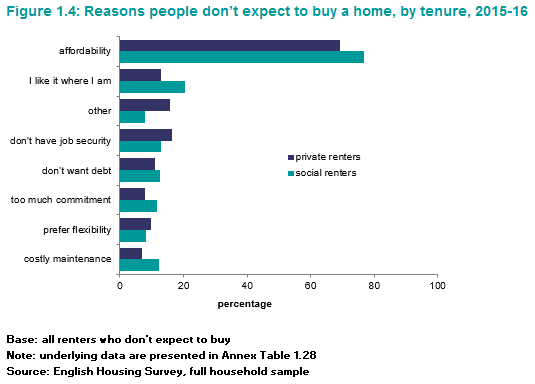 What the findings on expectations show is that there is a lot of optimism among private renters. A sizeable number - 617,000 - expect to buy within the next two years. However, only 104,000 private renters ended up becoming home owners in the previous 12 months, which suggests that a lot of that optimism is misplaced. A much higher number - 712,000 - considered applying for a mortgage so clearly most of them didn't go through with it. The main reason for not proceeding with a mortgage application, cited by 47% of renters (there's no social/private breakdown) was that the deposit was not large enough.

The survey finds that only 368,000 private renter households have savings anywhere near the level needed for a deposit. 1.5m have some savings but this is still only one third of the private renter population.

These stark numbers tell us that there will be no revival of home ownership any time soon. The government must realise that for millions of people, the only way to have a secure home is with a fully professionalised rental market offering protection from eviction.