London's renters are not getting enough protection from their council

With the votes counted in last week's London borough elections we now have some new council leaders. One of their responsibilities is to make sure local private renters are living in safe homes. But judging by the 32 councils' record in 2016-17, they have a lot of work to do.

London Boroughs took action against just 1 percent of the capital’s worst landlords in 2016-17. That's just one of the findings that we've uncovered in new analysis of Freedom of Information data - the basis of a new league table of council performance.

Here are some of the highlights: 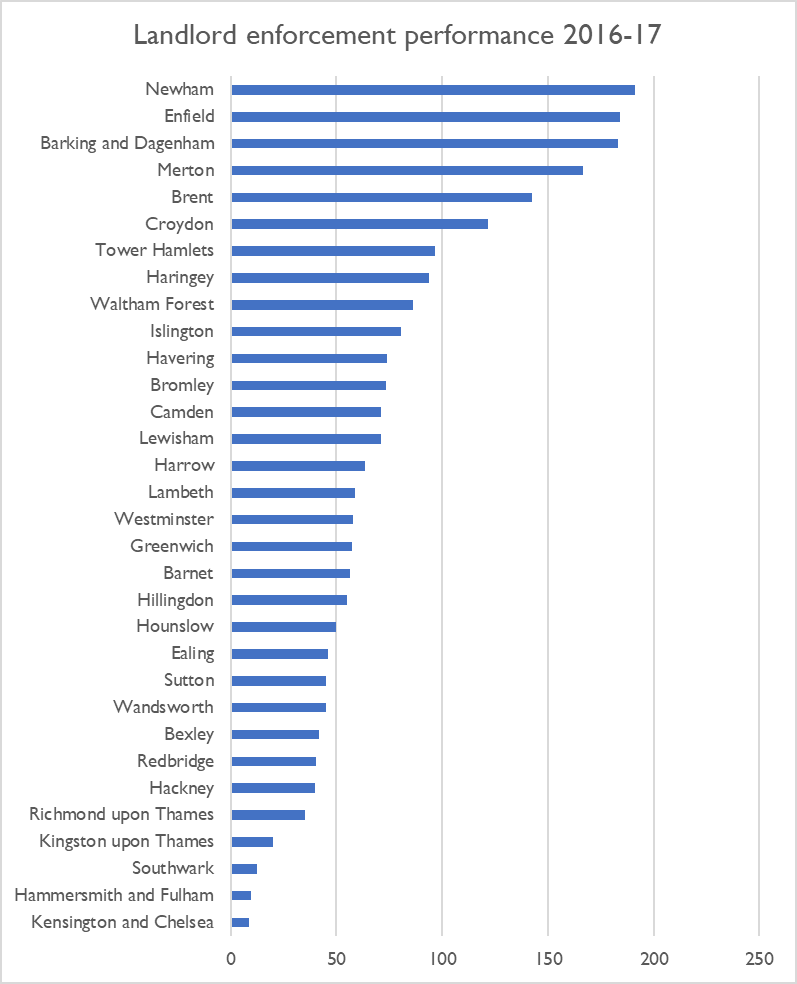 The league table was developed using two datasets compiled from separate Freedom of Information requests made by Generation Rent and the Liberal Democrats. Councils are scored on four measures:

Each council gets a score based on its performance in relation to the leading council in each category. For example, Merton took 3.13 enforcement actions against landlords for every 1000 private renters households, which is 61.2% of the 5.11 rate held by the best performer, Enfield.

That 61.2 is added to their score alongside the other marks out of 100 – in Merton's case, 100 for having the best enforcement-to-hazard ratio, 5.5 for their low inspections-to-complaints ratio compared with Croydon, and zero for having no prosecutions.

Some councils didn’t provide certain data in response to the requests so scored zero in the affected categories. For example, Kensington & Chelsea provided no figures on the inspections they carried out or the hazards they found.

The full table of figures can be found here, and some more notes about the data are at the bottom of the page.

The method isn't foolproof: Havering reported finding zero hazards, but issued one prohibition order, so strictly speaking their enforcement to hazard ratio is an eye-popping “infinity”. For ease of comparison we have set this at 1. We will be reviewing the methodology for the next time we run this analysis to be as fair as we can.

Among the 21 councils that provided both complaints and inspections figures, there were 15,382 complaints but just 11,897 inspections – and many of those were proactive, rather than responses to individual tenants’ requests, so this understates the number of distressed tenants left in the lurch.

Overall the data found that the 32 boroughs issued 919 improvement notices and 250 prohibition orders against landlords whose properties contained severe hazards - a fraction of London’s 95,500 unsafe homes estimated by the English Housing Survey 2015-16.

Improvement notices are the most common tool with which councils can force landlords to make repairs to their properties. Ignoring an improvement notice is a criminal offence, and they also give tenants legal protection from eviction for six months.

But the 26 councils who reported both figures found 4259 Category 1 hazards and only issued 771 improvement notices, leaving 82% of tenants unprotected if their landlord served an eviction notice. It is unclear how many tenants are forced to move as a result of complaining, because no London Borough keeps a record of the number of cases they deal with that involves an eviction notice.

One in ten private renters in London lives in an unsafe home and they rely on their council to force the landlord to do repairs. Yet few appear to be getting the protection they’re entitled to, whether their council is responding to complaints or taking appropriate action when hazards are discovered.

More tenants would be getting adequate support were it not for severe cuts to council budgets, but this work shows that some authorities are still doing much better than others. We want to see all councils serving tenants better, and each should be looking to other areas for ways to improve their practices.

If you want to help push your council to get better at enforcing basic housing law, please sign up here.

The Liberal Democrats shared data gathered through Freedom of Information requests to each local authority on:

Generation Rent requested data on number of complaints made about conditions in private rented homes and the number of tenants who made a complaint who were issued with a Section 21 eviction notice.

The private renter population data by borough is taken from the 2011 census.