Today we have called on the Mayor of London to adopt a set of policies that will speed up his efforts to end the capital’s housing crisis.

To remind him what’s at stake, we have uncovered another startling trend that is hurting the city and its people.

Every year the Office for National Statistics releases figures on internal migration – how many people move from one part of the UK to another – and people are moving out of London at an alarming rate. 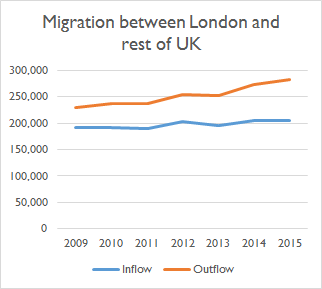 There’s a metropolitan middle class cliché that sees people leave university, move to London, start a career, find a spouse, buy a flat, then trade that in for a semi with a garden in the suburban commuter belt, just in time for the kids to start school. It’s therefore no surprise that more thirtysomethings and under-10s leave London than move there.

The destinations of London escapees reflect this picture. Of the people leaving London for another part of the UK, 64% are moving into the South East and East of England (and especially Surrey, Kent, Essex and Hertfordshire), with 12% moving to the Midlands, 11% to the North, 9% to the South West and 5% to Scotland, Wales and Northern Ireland combined. These proportions have remained consistent over the time period we have data for.

But what is concerning is that this emigration is accelerating. It means that more people are deciding London is not a long term option. It is no coincidence that this great escape has occurred during a period when house prices in London rose by 37%, compared to 16% in the UK as a whole, and rents rose by 10%, compared to 4% outside London. It is getting harder to enjoy a decent standard of living in London, or save for a better one, when your landlord is taking more of your money. 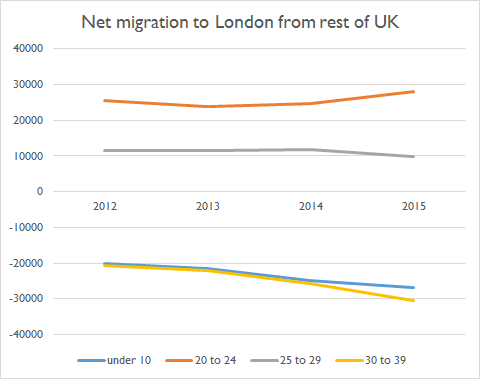 They are couples who want to escape the insecure private rented sector, but will never be able to afford a £400,000 price tag on a family home. They are single people who are sick of compromising on personal space but can’t find the rent for a studio flat. They are families who have been made homeless and whose council cannot rehouse them within London.

The costs of this to London are huge. Communities are losing valued friends and neighbours. Employers are struggling to recruit staff on wages that barely cover the rent. We estimate that by taking lower paid jobs in other parts of the country, the Londoners who fled the city in 2014-15 will cost the Exchequer £22.5m a year in lost income tax (and that assumes everyone who moved to the home counties kept their London job).

And the statistics only show those who have been able to make the leap. Many Londoners would love the standard of living available at Yorkshire rents but the inescapable fact is that their career and/or support network is in London. People who were born in the city are feeling forced to abandon what they've grown up believing is theirs. These people are just scraping by with no disposable income and, unable to save for an alternative, a very uncertain future.

One thing that would let London retain its skills, preserve its communities and continue to flourish is simple: lower rents. To achieve this long term, London needs more homes - but until enough are built high rents will inflict more damage on London and Londoners. That’s why we’re calling on the Mayor to investigate rent control. Read a summary, or the full paper, or join our campaign.

This analysis was covered in: