Life in the rental market: what the future holds for older renters

Most debates around housing focus on young adults, the drastic fall in their rate of home ownership and ways to boost the number of first time buyers.

Far less attention, however, is given to the vast numbers of renters who are already too old to get a mortgage and face a lifetime of renting instead. As more of them reach retirement age, the state will start paying more of their rent, and faces enormous costs unless it makes some fundamental changes to the housing market. Because politicians only operate with 5-year horizons, few are fretting about the implications of lifetime renting.

But we are, and today we publish a report co-authored with David Adler of Oxford University: Life in the Rental Market.

Using the English Housing Survey, we have projected that by 2035 nearly 1 million households of retirement age will be renting from a private landlord. Currently the figure is 370,000, so this projection suggests these numbers will nearly treble. That assumes continuation of current home buying rates among the over-45s, and no increase in the availability of social housing.

If those households owned their home, they would have minimal housing costs by the time they retire. As renters, though, there's still rent to pay and most will rely on housing benefit to keep a roof over their heads. An extra 600,000 housing benefit claimants would cost the state £3.46bn per year at today's prices. 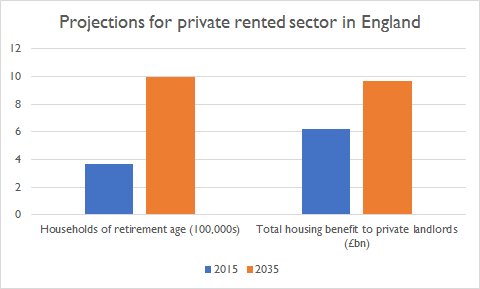 The report then turns to the findings of the survey we conducted in 2016, which suggests that the prospect of a lifetime of renting for millions of people is fuelling demands for reform of the rental market to provide cheaper and more stable homes.

The survey, of 1181 Generation Rent supporters, found that while the majority wanted to own their home, older respondents are drifting away from a preference for home ownership and towards a affordable rental option. Renters over 60 are almost twice as likely as renters in their 20s to prefer affordable rental tenure over homeownership.

While the non-random sample limits our ability to make conclusions about the population as a whole, David's analysis suggests large differences between groups in the sample — young and old, those with high rent burdens and those with less of one, those who have experienced adversity as renters and those who have not.

It's no surprise that the idea of home ownership is still popular among those who are starting out in renting. What's more interesting is that the longer, or worse, someone’s renting experience has been, the more likely they are to favour reform of the rental sector over an escape to owner occupation.

As the renter population ages, this preference, and demands for reform, will only increase.

Faced with a ticking fiscal timebomb, the answer for politicians is not further cuts to housing benefit, because that will only further immiserate people who have nowhere else to turn. Indeed, it will become electorally impossible to ignore their plight.

Instead, we need years of investment in new homes to bring down rents and a transformation of the private rental market into a professional provider of long term homes. This means giving tenants protection from unfair evictions and putting a limit on rent rises.

Luckily there's an opportunity to do something: the Budget is coming up.

The Chancellor is due to announce plans to make landlords offer greater security for tenants on 22 November. Help him get it right by writing to your MP.

And there are now calls from every shade of the political spectrum for investment in social housing. There are many, many reasons to do this, but our projections add another: if today's 45-64 year old private renters could access social housing by the time they retire, the taxpayer would save £930m per year in housing benefit - on top of paying down the debt.

Life in the Rental Market

A summary of responses to our 2016 survey