The first Register of MPs' Interests of the new parliament was published last week. A comb through the data reveals that there are 126 residential landlords in Parliament. Landlords make up only 3% of the population but they are represented by 19% of the House of Commons (the same proportion of the UK population who rent privately). 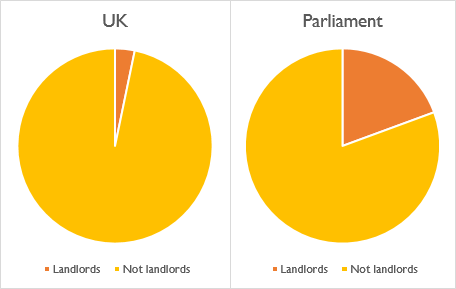 This is actually down from 153 at the end of the last Parliament, though the Guardian reported that was up on the 2010 figure.

What worries us about this the most is that even if those landlord MPs' hearts are in the right place - they all probably treat their tenants well (right?) - that could easily give them a rose-tinted outlook on the private rented sector. "Because I'm a great landlord," they might tell themselves, "there's no need to reform the system." And that will distort the debate.

The register also reveals that another 10 MPs let out commercial land and property, and indicate that a further 88 own a second home that they don't let out (at least at a rent above the £10,000/year threshold).

Find out if your MP is a landlord (or, less likely, if your landlord is an MP) on our spreadsheet here.

And, either way, please take 1 minute to email your MP and urge them not to neglect renters in this parliament.