Just 62.9% of England's population owns their home - the lowest proportion since 1985. And the private rented population now stands at 4.5m households, up on last year and bigger than in 1961, when slum landlords like Peter Rachman were making tenants' lives a misery.

These are the big findings of the English Housing Survey Headline Report, the first of two releases of the government-commissioned survey for 2015-16.

At this rate, there will be more private renters than mortgage holders in just five years' time. It's already the largest tenure in London. 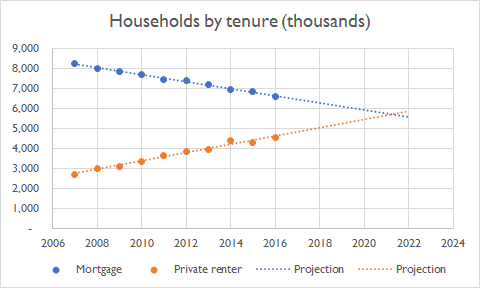 It's worth noting that outright owners are still growing in number, but this trend will have huge implications, politically, economically and socially. And it is based on the assumption that the government will continue to fail to fix the housing crisis.

There are several other interesting findings from the report:

None of this will come as any surprise to the government, but they continue to shirk their duty to make renting more acceptable or build the homes that are needed to bring down house prices and rents.

Generation Rent is campaigning to improve the lives of the UK's private renters and won't let the government get away with inaction. We rely on the generosity of our supporters to keep us going - please consider making a donation.