Proof that millions of renters are failed by unfair rental laws

The latest English Housing Survey was out last week, and the results are further evidence for what we’ve been arguing for years: England’s rental laws are making life insecure and expensive for growing numbers of people.

The EHS confirms that the housing crisis has drawn millions into the precarious private rental market in the last two decades, meaning that the typical renter is no longer a twenty-something: the biggest increases in people living in private rented homes between 1996-7 and 2016-17 were among the middle-aged (people in the 35-44 and 45-64 year-old brackets) and couples with dependent children.

Security for these renters is limited: the Survey finds that private renters experience a high level of churn, with more than half (57%) having lived in their homes for less than 3 years. As we’ve noted before, figures like these make a mockery of the frequent claims from landlord lobbying groups that the “average” tenant lives in their home for four years.

Still, not quite as much churn for private renters as housing ministers. 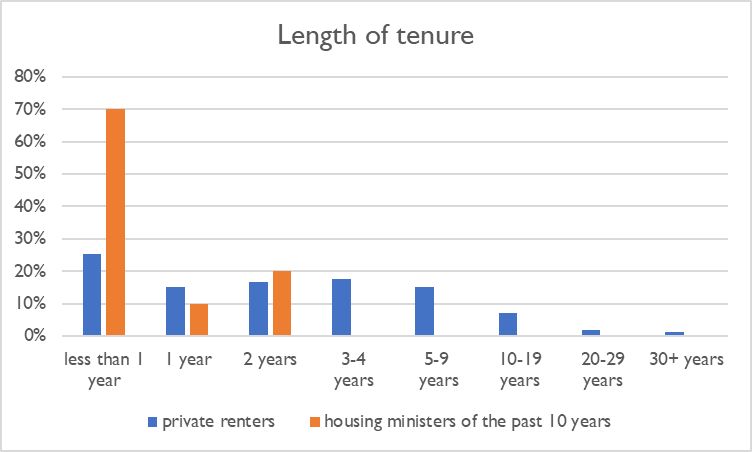 One in five renters who moved did so because their home was too expensive or in poor condition, or because the landlord forced them out. This figure rose to 22% among families with dependent children, and a shocking 30% of renters aged 65-74 who moved in the last three years had been given notice by their landlords. Shelter has written a blog post focusing on this.

Private tenants know that the rent is too high, and 1/3 renters found it difficult to pay their rent in 2016-17. Although over 2.5m private renter households expect to buy a home, fewer than 1 million have anywhere near the amount needed for a deposit: just 957,000 households have savings of £5000 or more.

The EHS also looked at conditions - which can be measured by how many homes are unsafe (15%), or non-decent, which is a wider measure including disrepair, thermal comfort and modernisation - 27% fail that test. Although the proportion of private rented homes that are non-decent has fallen, the number of them has actually risen, from 1.2m in 2006 to 1.3m in 2016.

It is no wonder that so many renters want to buy, given how insecure, expensive and ultimately inadequate renting appears today. Far too many private tenants are forced to move because of conditions, cost or their landlord’s whim.

But it doesn’t have to be this way. The government could protect tenants and give them confidence to complain about disrepair by restricting rent rises and abolishing Section 21, the landlords’ ability to evict with no reason. Sign our petition to add your voice to the call for improved renter security and dignity.