Where has renting grown the most since 2011?

Today we learned that the population of private renters grew by more than 1 million households between 2011 and 2021.

One in five of us in England and Wales now rents from a private landlord - a huge increase in ten years, while the proportion of the population that owns their home has fallen.

All that is stuff we had a pretty good idea about already, but for the first time we know where all those private renters are!

The Office for National Statistics has a great mapping tool to see where there were concentrations of private renters in 2021 (and owner occupiers and social tenants, for that matter) - right down to the neighbourhood level.

This map we've created shows the change in the private renter population between 2011 and 2021 as a percentage of the total population. There is an interactive map at the bottom of the page. The darker oranges are where there has been a bigger increase in the number of private renters. The purples are where the proportion has actually shrunk. 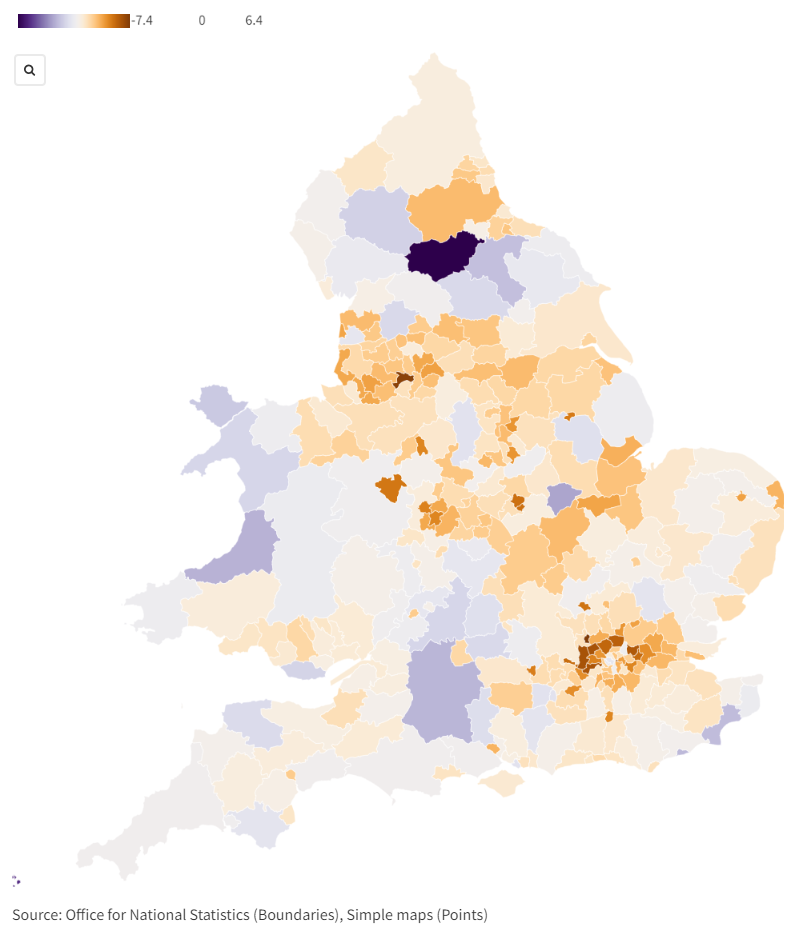 You can see that the most significant growth is around the northern and western edges of London - and Watford, just outside the capital, has seen the biggest increase, of 6.4 percentage points.

Salford in Greater Manchester has also seen a huge increase (along with a lot of flats being built in Salford Quays, where 76% of residents are private renters).

Leicester has seen a big increase in its private renter population, along with its neighbouring district of Oadby and Wigston.

Traditionally, private renters have been concentrated in cities, where students and young graduates are willing to live in flats. But as more of us rent into our thirties and forties, we're moving out into suburban areas for the affordable space to raise a family. That explains what we're seeing in outer London and surrounding areas - plus towns further afield like Reading and Woking.

At the same time home ownership has become more difficult, as house prices have surged out of reach of people on local incomes, particularly in places like Salford, Luton and Crawley.

But it's happened elsewhere. Left-behind areas like Stoke, Mansfield, Durham and outer boroughs of Merseyside and Greater Manchester have seen growing private renter populations as stagnating wages have priced young people out of home ownership.

At the other extreme, the purple shows us where the proportion of people who rent has fallen. But this is not a cause for celebration: those areas tend to have seen a dramatic increase in holiday homes. So what's happening is that second home owners have been buying up homes that were once lived in, and landlords are switching to more lucrative holiday lets - read more about our work on this.

Despite an array of supposedly pro-home ownership policies over the past decade, the private rented sector was the fastest growing tenure. A million more households are paying high rents to private landlords, face a much greater risk of living in a poor quality home than other tenures, and live with the threat of eviction at short notice without the chance to appeal.

In 2019, the government belatedly recognised the need for a much better deal for private tenants, including the abolition of unfair Section 21 evictions, but as we start 2023 we are still waiting for the legislation that will make this a reality.

Reforming the rental market has never been more urgent - sign up to campaign with us today.