Today we'd like to celebrate the companies that have gone above and beyond what is a reasonable price to charge someone who is not your customer (that reasonable price is £0) and are milking the most cash out of their captive market of tenants.

Our research on www.lettingfees.co.uk covers more than 1000 letting agents and uses two adults renting an unfurnished two-bed room property - let's call them Gary and Linda - to compare fees between them all. The average upfront cost in non-refundable fees is £404.

There are eight letting agents that have more than 100 branches each throughout the country. Based on our research, seven of them are charging more than the average.

Many letting agents have realised that, when you’re desperate to put a roof over your head, you will tend to take the first property you can afford the rent on, and fees are an afterthought. Rather than basing their fees on what starting a tenancy actually costs, these agents know they can name their price, and use renters' rainy-day funds to sustain and expand their businesses.

Some agents, like Piper Property in Bristol and East & Co in East London, recognise the poor business ethics of charging a captive market vast sums of money for pieces of paper, and duly charge their tenants nothing.

As a result we see a staggering range of fees. Here's what the Big Eight charge:

Londoners know them as Bairstow Eves, northerners as Bridgfords, residents of the south coast Austin & Wyatt, and Bristolians Taylors. With 40-odd brands and 1200+ branches, Countrywide is the nation's largest estate agent - and, of the large agents, also charges the most! Our typical 2-adult household, Gary and Linda, would pay £622 in upfront fees - covering the admin fee, the reference fee, the tenancy agreement fee and the check-in fee (more if they decide Gary and Linda need someone to guarantee their rent). Countrywide made £19.5m in profit last year.

This partnership charges different fees in different parts of the country, with an average, across the 6 branches our website covers, of £593 - which is surely boosted by the Thames Valley's Romans, which charges a stomach-churning £813 - and that's with the minimum check-in fee possible. It is the single most expensive letting agent in England (as far as we know). 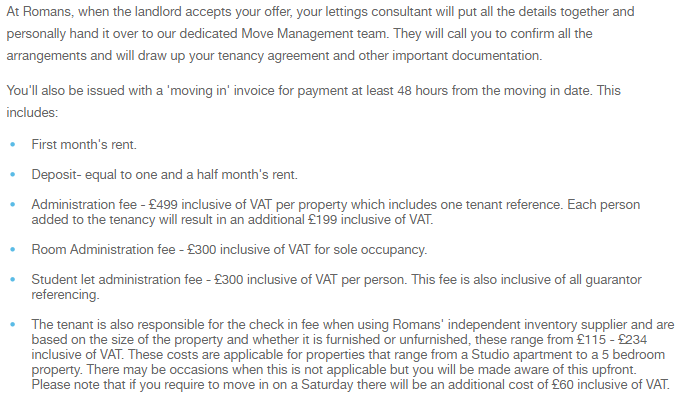 Owned by Skipton Building Society, Connells Group would charge Gary and Linda £570 for starting a tenancy, with a consistent policy throughout its nearly 600-strong network. This includes the Sequence brands, though in London, Barnard Marcus charges a higher inventory fee (£162 unfurnished).

Spicerhaart's 100+ branches across several brands, including Felicity J Lord in London, would charge Gary and Linda a consistent £540 in upfront fees.

This chain of 192 agents, owned by The Property Franchise Group PLC, also includes the CJ Hole and Ellis & Co brands. They charge varying levels of fees, with at least one (Brentford) being opaque about its check-in fee, making it hard to compare with other local agents. The average we calculated from 15 branches was £476, but this is likely to rise if and when Brentford opens up its fees policy. 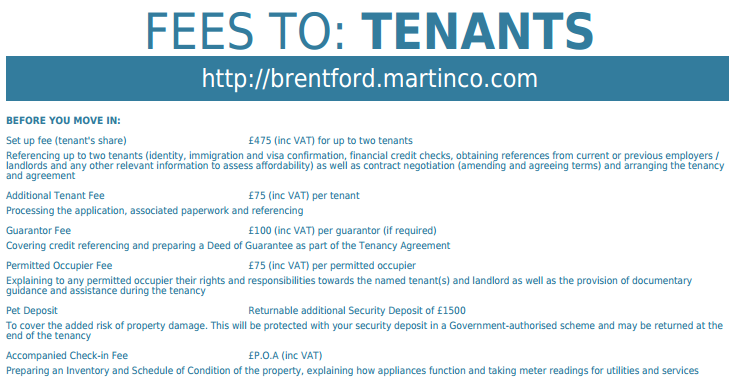 Hunters Property PLC is another franchise-based company, boasting 210 branches, inconsistent fees and a much more inconsistent transparency policy. The Wokingham and Stoke Newington branches of Hunters fail to specify check-in fees, while the Ealing and Brentford branches appear to charge for both check-in and inventory, which is normally the same thing. We raised the former concerns with Wokingham and Hackney councils, which have responsibility for enforcing transparency rules for letting agents. For what it's worth to Gary and Linda, the average we calculated is £416. 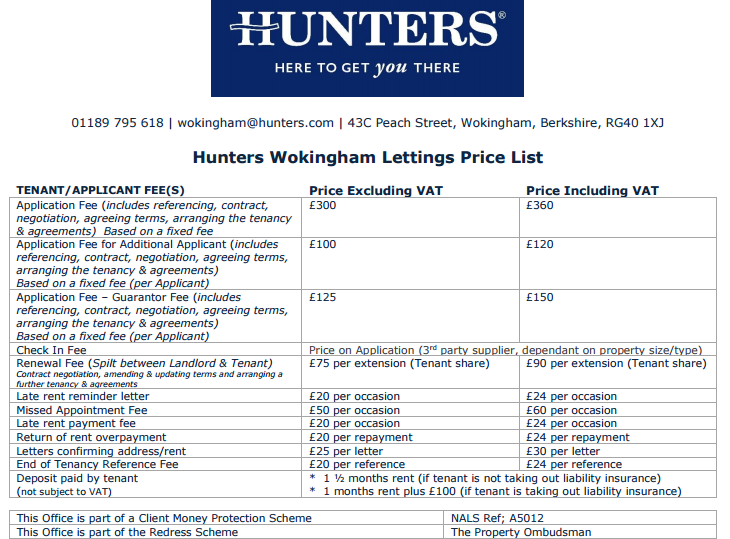 Belvoir Lettings PLC has 302 franchises, with an average upfront set of fees of £414, though this gets as high as £590 in Balham, where you pay £150 per person admin fee, plus what appears to be a single £150 reference fee for the tenancy (as well as inventory). 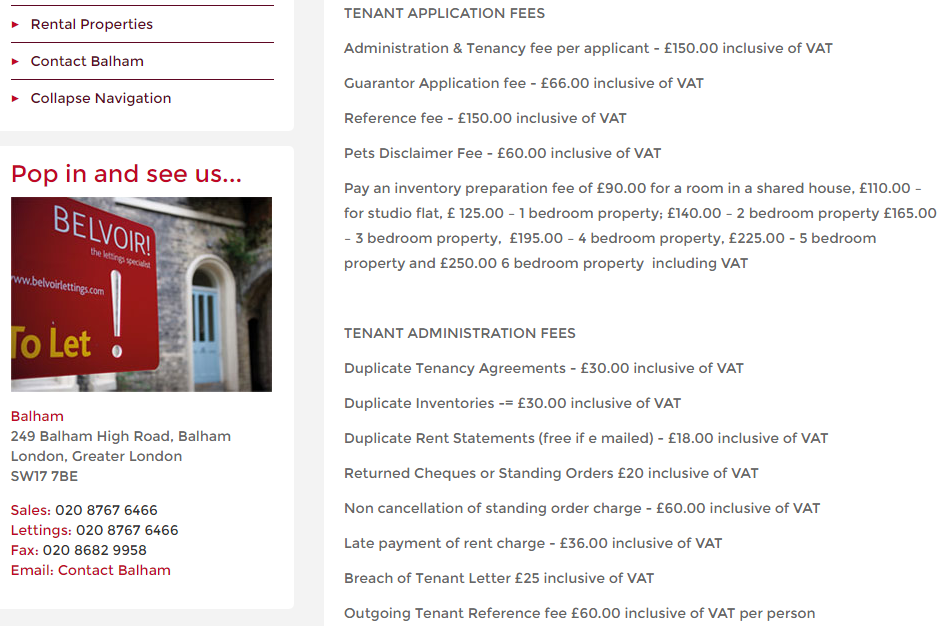 LSL is the parent company behind the high street names Your Move and Reeds Rains. Its branches also tend to set their own fees, and are the only ones to charge below the national average we have - the average of the 12 agents on our site is £381. But at only £23 lower, this is hardly a recommendation.

Finally, a dishonourable mention for Spencers Property Services of East London, who are the most expensive agents outside the Big Eight and would charge Gary and Linda £742.

To be fair, Spencers also offer the following advice further up the page:

This breakdown shows how important tenant fees are to the larger estate agents - strip them out and our national average comparison fee would drop. Also we can see that using one of the big boys does not necessarily mean they are automatically transparent.

The gilded age of the letting agent is now under threat from the government's proposals to ban fees - which are out to consultation until 2 June. We should expect a determined fightback from agents so it is essential that we make our voices heard.

Having your say on the ban couldn't be simpler.

Note: Levels of fees were accurate at the time of posting. We will post updates if and when tariffs change.