As more couples with children live in the PRS, will it ever be family-friendly?

Today the Department for Communities and Local government released some of the datasets underpinning the latest English Housing Survey (comprising of data up to the year 2013/2014, the most recent we have) and the central finding is no longer surprising – the private rented sector continues to grow.

In the year to 2014, the PRS has increased by 420,000 households (an increase from 18% to 19.4% of total households). As homeownership continues to be unaffordable for millions, and social housing inaccessible, this follows a trend dating back many years.

What is much more concerning for people who recognise that private renting remains fundamentally insecure, is the number of families who are part of that growing population.

In the last year for which there are figures, the number of households comprising of couples with dependent children increased by 201,000 (up from 17.7% to 21.3% of the total). This shows that the private rented sector is housing hundreds of thousands of more families – yet these households can be evicted with only two months’ notice, with all the potential problems such instability can cause for a child’s education, health and wellbeing. 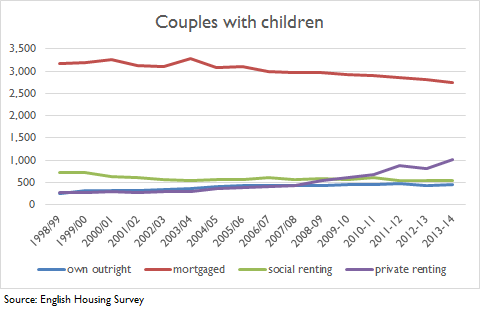 In total there are now 1.5 million families living in the private rented sector.

Moreover, it is clear that the demographic of the PRS continues to change more generally. While the number of private renters in their 20s and 30s has stabilised, there are many more people who would traditionally be in homeownership in previous decades. In the same period, there are 150,000 more households where the main householder is aged 45-54 (up 12.9% to 15.1%) and 35,000 more households where that person is aged 54-65 (up 6.6% to 6.8%).

So what picture is ultimately painted by these figures? Clearly, the PRS has become a mainstream tenure for families and will continue to be so until prices come down. But if the PRS remains at its heart insecure, with the worst conditions and for the most part unregulated, can government really say it is fit for purpose? And is the market really working if others have to share in increasing numbers, just to afford their rent?

Each passing day points to a one logical end. The private rented sector needs to be reformed to control rents, give people stability and ensure they live in decent conditions.

We are campaigning hard on getting the government to take action. But we need your help.

We need to raise £60,000 by 31 August to continue our work beyond September. If you want to see a campaign focused on bringing sanity to the London housing market, please consider donating just £20 to get us closer to our goal. Click here for more information.