On 26th April, we launched a social media campaign called #ventyourrent on Twitter and Tumblr. We asked people to tell us on cardboard, a photo, or just a tweet, what they were paying in rent and what it bought them.

The plan was to get Londoners sharing their worst experiences of renting and generating some solidarity ahead of the Mayoral Election on 5th May. We hoped that seeing the posts would get people thinking about the housing market as a political issue that they could have some influence on. If they did, we had a handy guide for them.

It was the first campaign of its kind that we have attempted and we could not have done it without the energy of a crack team of volunteers*, the guidance of Paolo Gerbaudo of Kings College London, and the inspiration of Pierre-Emmanuel Lemaire, Yasmina Aoun, Cong Bi and Nicola Lotter of Central St Martin's MA Communication Design course.

It was a huge success, generating our biggest media story to date, attracting hundreds of submissions, and surely contributing at least a tiny bit to the highest ever turnout for a London Mayoral Election.

Now that the dust has settled, we decided to find out what #ventyourrent taught us.

There were a few problems that it's clear Londoners are no strangers to, including the most common complaint, damp and mould, with 24 posts (by our count):

There were 20 cases of dodgy plumbing and leaks:

Was once told 'No, what smell?' by an est. agent, who was then sick in his mouth because he'd opened it for too long to speak #ventyourrent

the worst, though was the bedsit where the shared kitchen was so full of mice you had to bang a frying pan to get rid of them before cooking

We were pretty surprised by how many people (14) reported flimsy ceilings and other structural failings:

Renters have to deal with bullies...

bfs landlord lets himself in. when asked to knock nxt time he says 'like this?' & starts kicking and bashing door, does damage #rantyourrent 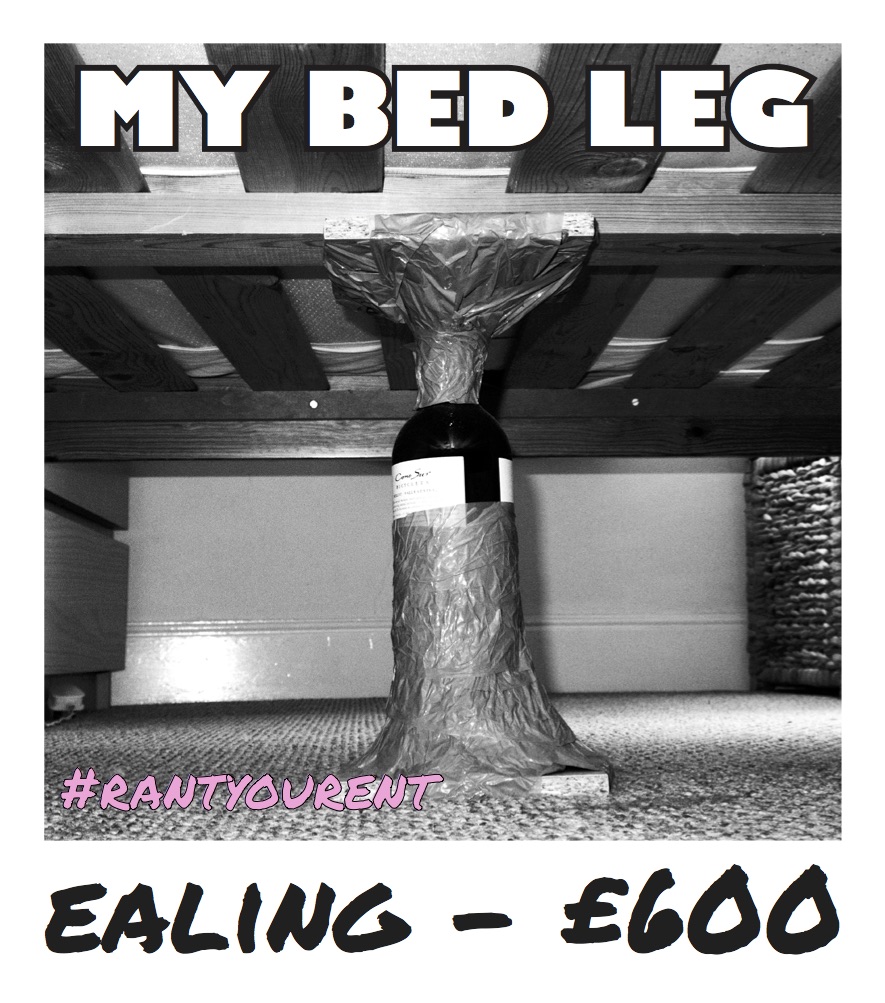 ...and people who genuinely endanger their lives

2yr anniversary of being hospitalised due to landlord's wiring. No smoke alarm. Evicted us & sold up. #ventyourrent pic.twitter.com/QlLHagvItV

And if you aren't bothered about other people's woes, some landlords are ripping off everyone:

£530 in Walthamstow. Dodgy landlady raises rent & asks us to say 'she's out' if someone comes round as she is DODGING TAXES. #ventyourrent

For many of us, it's the sheer cost of living in London that's the biggest problem:

You know what's the worst part of #ventyourrent for me? That I'm kinda jealous that some of you are paying "low" rents.

Mouldy bedroom but ~£400 rent? Well, at least I'll be able to buy and eat some real food #ventyourrent

Got home today to a letter saying my rent is going up again. Not good timing anytime except as a contribution to #ventyourrent @genrentuk

And for some, it's already got too much.

Paid £725 pcm for half a Herne Hill flat which is £150 more than I now pay in Newcastle for my own 2 bed in the nicest area. #ventyourrent

Obviously, bad renting experiences aren't confined to London - we had people get in touch from all over the UK and we even got folk joining in from across the pond

#VentYourRent $1,500 Oakland, CA. Roof leaked, threatened with eviction, harassed daily at 6am and lied to by our landlord until we left.

#VentYourRent & #RantYourRent show how out of control the Tory Housing Crisis is.

I’ll stand up for renters. pic.twitter.com/o7nfg2QFn3

Many of the cases demonstrate the need for reform of the rental market, but it's important that tenants understand what course of action they can take as things stand.

Whether it's reporting landlords to the relevant authorities or naming and shaming them, we thought it would be a good idea to create a new page with all of that on. We're calling it Help & Info. It's a work in progress, but we hope it's useful.

If you haven't vented you rent yet, the hashtag and Tumblr are still taking submissions.

A selection of the coverage: